In memory of the legendary Alex Chilton who passed away this week we are republishing Scott Homewood’s Big Star double review that originally ran on July 14, 2009. If you are not familiar with Big Star and the work of Alex Chilton I urge you to become familiar with it now. It’s better late than never. ed

What can be written about this bedeviled band that hasn’t been already? Besides maybe Badfinger, Big Star is the most romanticized rock and roll failure ever to release an album. Yet to call them failures doesn’t do the band justice as not only has the band released three of the most controversial and influential albums in rock and roll history but a version of them still performs today and has released an album of new material as recently as last year. That only two of original members still perform under the Big Star name (Singer/songwriter/legend Alex Chilton and drummer Jody Stephens are augmented onstage by two of the semi-defunct alt-pop band The Posies, Jon Auer and Ken Stringfellow) makes no difference as the replacements found for the departed members mesh perfectly with the surviving members of the band and in retrospect were the perfect choices to revive the band when Chilton got the idea to jumpstart Big Star in the early ’90’s.

The story of Big Star begins in the late ’60’s in Memphis when Alex Chilton and Chris Bell were youngsters just starting out playing in bands. Bell, enamored with Chilton’s mature-sounding voice (who am I kidding with “mature-sounding”? Chilton was skinny, white and 16 yet sounded like a 40-plus-year-old black man when he sang) and stage presence after watching Chilton perform with his band at the time, wanted Chilton to join forces with him and form a new vocal group. Chilton decided to remain with the band he was in, which later morphed into The Box Tops and scored with such songs as The Letter and Cry Like A Baby among other white-soul hits. Though the Box Tops released four hit-and-miss albums, there was plenty of tension between the band and their handlers. Though Chilton sang lead and was present on every recording, the band’s management and label preferred to use session musicians on all their recording sessions and did not allow the members of the band to write any of their own material. Even though Chilton was later allowed to write a few album tracks and B-sides he had long resented the total domination of producers and managers of the band and broke the band up by leaving the stage in the middle of a gig so he could go on a solo career and perform his own music. After several trips to New York to jump-start his career failed to ignite any great spark, Chilton returned to Memphis to regroup. There, he reunited with Bell and together founded the band Big Star with Stephens and bassist Andy Hummel, who happened to be in a band with Bell called Ice Water. At the point of Chilton and Ice Water joining forces, the new band decided to forego any of their current material and instead quit gigging to enter the studio and create totally new material and a new band persona. Bell was even more mercurial than Chilton and would often quit and rejoin the band, even quitting shortly after the first album was released due to the general ho-hum of the public at large due to Stax’ poor distribution system at the time. Also leading to Bell’s departure was Chilton’s growing role as leader and Chilton’s desire to play live, whereas Bell wanted to make albums but not tour. Bell would jump back into the fold for the start of the recording sessions for Big Star’s second record, Radio City, but left for good before it was completed. Again, the new album Radio City would be ignored by the public due to Stax’ inability to market a rock and roll band. The group was in tatters and though Chilton struggled on with occasional help from his bandmates, it was apparent his songwriting was starting to skew. Another album was recorded, but shelved for three years and finally released to zero fanfare three years later. By this time, Bell had died in a car accident. In the ’90’s the band was revived to play live gigs only but eventually recorded an album which was released last year. Obviously, while okay, the 2000-era Big Star does in no way equal the original, showcased on this CD, which includes both albums on one disc.

While the first record has always gotten the lion share of the attention due to it being the band’s first musical statement, bringing a fresh new sound to the music world when the music scene was in the midst of the throes of excess (not to mention the album showcases the scintillating and brilliant interplay between Chilton and Bell) Big Star’s best known song (at least until the first album’s In The Street became the theme to That 70’s Show) September Gurls came from the second album and just about encapsulates everything that was great about the band. The guitars are bristling, the melody memorable and sweet and the groove is undeniable. For those looking for the perfect definition of power pop, one need look no further! Of course, there are many memorable songs on these two albums and though ignored upon release (as was the band’s third album Sister Lovers) the albums endured due to their timeless songs.

These albums are in the rarefied air of being both the most overrated and underrated albums you will ever hear in your life. Many bands from the late ’70’s onwards – bands like R.E.M., The Replacements, Green Day and thousands of others have been influenced by these albums to the point of singing their praises in ever interview they give. Yet, if you were to ask the average rock fan on the street who Big Star was or to name their favorite Big Star song, 99 percent of them would look at you blankly while tilting their heads like a confused dog. To me, without using too much hyperbole, these albums were a Holy Grail I finally found after years of searching in used record shops and I never felt for one second that the search wasn’t totally worth it. My best friend listened to them with me and to this day regards them as just another rock and roll band with some decent elements who couldn’t hit the right combination in order to make it big. Regardless of how you feel, the way most people look at rock and roll is defined one way or another by these albums. Whether they end up being your favorite or just something you listen to one time, you still need to listen to them or forever miss out on some of the most passionate rock and roll ever created. And you wouldn’t want to do that now, would you?

Buy it at Amazon: 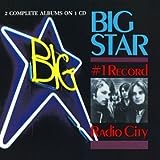 I think you’re right on…one is either hardcore about Big Star or ‘eh, so what?’. And you won’t know til you check ’em out.