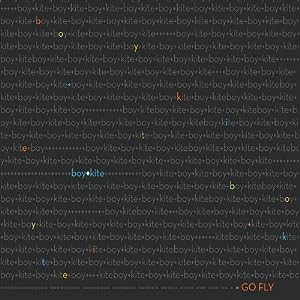 Duality. This seems to be the perfect word to sum up the style of Austin-based band Boy + Kite. When Darvin Jones and Beth Puorro decided to take their love of music and create a band (a decision made in a hot tub, by the way), the decision was the easy part of the equation; the tougher part was how to combine Puorro’s commercially-leaning musical influences with Jones’ more experimental ones. But it is this seemingly odd combination of influences that helps to shape the sound of their band Boy + Kite (that’s “Boy plus Kite” for those unfamiliar with the band). And this unique style to their music helps to create a very enjoyable and solid debut release.
To help them fill out their sound, Jones and Puorro brought in bassist Giuseppe Ponti and drummer Chris Mietus to complete the band. This quartet takes the duality in Jones and Puorro’s writing style and solidifies it into a listener-friendly sound.
When you put on the band’s debut release of Go Fly, you immediately get a sense of the duality that makes up the sound of the band. The song “Neighbors” has a very catchy “pop” feel to the music, but it is the fuzz guitar that adds the experimental feel to the mix. The delicate vocals from Beth Puorro add a stronger “pop” feel to the song as a whole, producing one of the most commercial songs on the release.
“Ohio” is one of the most complex tracks on Go Fly from Boy + Kite. The track begins with a style that may remind some people of the band Doves: Like songs from that band, “Ohio” opens with an instrumental section that features a hard/soft musical combination with acoustic and electric guitars working together to create an almost contradictory sound for the first seventy seconds of the track. From there, a lighter track emerges that features Jones and Puorro singing the lyrics together in a pseudo-duet. The track alternates between harder and softer for the remainder of the song, creating one of the most interesting songs on the release.
Beginning with the drums of Chris Mietus and quickly transitioning to full band, the track “Deciphering Static” is one of the hardest rocking songs on the debut release from Boy + Kite. The alternative rock song is also one of the songs that you might gravitate to while listening to the album.
If anyone wanted to describe the sound of Boy + Kite by putting on one of the band’s songs as an example, probably the best track to play would be “Think in Stereo”. The song definitely has the pop/experimental combination that Jones and Puorro create in their music and the lyrical play between Jones and Puorro as they sing the song creates a fun feeling on the track.
While Boy + Kite’s sound is created by combining Darvin Jones’ experimental influences with Beth Puorro’s more commercial influences, it is one of Puorro’s influences that seems to make a very loud appearance on the band’s song “One:” Puorro lists The Cure as one of her influences and “One” all but screams that band’s name as you listen to that song. The seemingly Cure-inspired music along with the love song-style lyrics creates a song that is very passionate and easy to sing along with.
One of the most intricately written songs on Go Fly is “Dear Lovely”. The band seems to have painstakingly composed this track to add slightly more melody to the music of this song than what appears on the rest of the band’s music. The beauty of the music contrasted with the finality of the lyrics pulls the listener in two directions at once.
Boy + Kite takes the duality in the writing styles of Darvin Jones and Beth Puorro and creates music that will have both commercial rock lovers and lovers of more challenging music turning up the volume on the band’s debut release of Go Fly. Whether you are a fan of experimental rock or pop rock, you’ll find a lot to enjoy on Go Fly from Boy + Kite.
Click HERE for the video to “Skipping Backwards” from Boy + Kite.
For more information on the band’s promotion company, check out Fanatic Promotion.