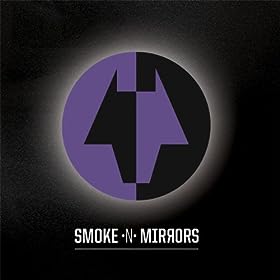 Smoke-n-Mirrors is the title of the EP that Dansewolf is currently promoting. Throughout the six tracks that make up the EP, the music is sure to get your blood flowing, as you enjoy the high energy feel to the songs.

The EP begins with “In L.A.”. As the band finds itself situated in the city of Los Angeles, “In L.A.” is their ode to the city where everyone wants to be a star but few get that chance. The lyrics of the song reflect the ups and downs that many experience. The music of the song seems a lot more upbeat and energetic when compared to the lyrics. Juls D and the band create a straight-out rock song with the strong, driving feel to it. The “call and answer” between Juls D and the band near the end of the song is very infectious.

On a track that lies somewhere between Blondie and No Doubt, the title track of “Smoke-n-Mirrors” also contains lyrics about being fake. This time, however, it’s a lot more personal as the lyrics sung by Juls D describe someone who seems to be one person at one time and someone completely different at another, all while the singer is deep in the thick of the deception.

Easily the strongest and most commercial of any of the tracks on Smoke-n-Mirrors from Dansewolf is the track “I Think Maybe”. The strength of the song is once again the driving feel of the music as the band takes their rock sound and adds a generous amount of “pop” feel to it. The lyrics sung by Juls D are very reminiscent of those sung by Deborah Harry a few decades ago. And when she hits the refrain of the song, she creates one of the most listener-friendly and singable refrains to come along in quite a while. Add in the bridge that is sung by a chorus of energetic voices and you have a track that will have you hitting “repeat’ many times.

Lying somewhere between Glam Rock-era Bowie and the pop/rock music from a few years later is the song “Shut you Down”. While most of the Smoke-n-Mirrors EP from Dansewolf has a very energetic nature about it, “Shut You Down” may ultimately bring to mind songs from artists like Tiffany or Belinda Carlisle. The slower pace of the song seems to give more emphasis to the song’s lyrics about being torn between feelings of needing to be close to someone and wanting to let go.

Just like the earlier song “I Think Maybe,” “Love Hate Heartbreak” is a track that will grab you and won’t let you go. Like “I Think Maybe” before it, the song has a very commercial feel to the song that will attract rock music lovers of any age to the song. The electronic drumbeat at the beginning of the track, mixed with the feel of the guitars and the strings that have been added to the track, combine to produce a song that has mass appeal to it.

The last track on the release finds the band going in a completely different musical direction than on any of the other tracks. The song “Like a Ghost” features a “retro” vibe that combines elements from Doo Wop with elements from “girl groups” like The Supremes or The Ronettes. It is the piano on the track that gives the song its biggest ‘50s influence to the music. The lyrics of the song also seem to transport the listener to an earlier time in Rock history, as well. “Like a Ghost” allows Juls D and the band the chance to stretch and it gives the listener a chance to experience a little taste of a time gone by.

While it only contains six tracks, Smoke-n-Mirrors from Dansewolf starts strong, stays strong and never disappoints. What more can you ask for?

Check out the live version of “In LA” by clicking on the link.