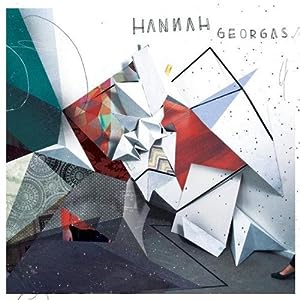 Singer-songwriter Hannah Georgas calls Vancouver, British Columbia home, though she was born in Ontario. This Canadian musician has taken many different bands and musicians as her influences to help her create the style of music that shows up on her albums. While listening to Georgas’ music, you can hear a mix of people like Human League and early OMD, even sounds from bands from today like fellow Vancouverites Mother Mother. With this style of music, Hannah Georgas is currently supporting her newest self-titled release.

The self-titled release from Hannah Georgas begins with the track “Elephant”. The beautiful vocals of Georgas help start the track off while the music provides a soft base for the vocals. The music slowly builds and then the guitar joins in and helps to add a lot of power in the track.

With the next track, the song “Somebody” brings the music of Georgas back to the days of the New Wave era of music as the drum loop mixed with the feel of the guitar really bring back the New Wave feel of music from that time period.

The third track off of the self-titled release from Hannah Georgas is the song “Robotic”. The track features one of the strongest rock approaches of any of the tracks on the album. While listening to the track, you can hear influence from Blondie or even Altered Images in the music; especially in the keyboards of the track. The song is very infectious and would feel right at home on any New Wave station from the ‘80s or any current radio station.

The next track of “Enemies” finds Hannah Georgas stripping down her sound to create a track that feels closer to keyboard-based electronica than rock and roll. The beginning of the track features a simple drum loop that gives the song its beat while the rest of the music is also rather simple but still entertaining at the same time. The music builds throughout the song to create a track that makes use of the electronic base that helped create the feel of the track until it fades at the end of the song.

On the track “Millions,” Hannah Georgas changes her style on her music. The song contains a good amount of punk influence in the electronica music that Georgas is known for. The combination creates a song that also contains a nice commentary on today’s music industry and the music produced within. Like the earlier track of “Robotic,” “Millions” is another song that could easily find its way onto radio…….if the rough language were removed.

With the track “Ode to Mom,” Hannah Georgas creates a track that starts out slow but ultimately builds to a strong track that finishes very strong. The electronica style created on the keyboard is soon replaced by a guitar-based style that gives the listener a few moments of beautiful music before the track returns to a quieter feel. The lyrics seem to contain logic that might have been passed on from mother to daughter.

The newest release from Hannah Georgas comes to a close with the song “Waiting Game”.  The track brings together styles from the eighties with those from current-day musicians to create a track that seems to encompass both eras while creating a song that still seems to be fresh enough to be right at home on today’s radio dial. While the track is keyboard-heavy, there is still plenty of guitar feeling to give fans of both mindsets plenty to enjoy.

While the album finishes with “Waiting Game,” the CD comes complete with the “bonus track” “The Hardest Part”. While “Waiting Game” was mainly based around the keyboard, the extra track finds Georgas creating a track that focuses on the guitar as the main instrument while the keyboard is used to add nice embellishments to the track. The easy pace of the track gives the album a nice ending feel.
The 2012 self-titled release from Vancouver-based Hannah Georgas finds the singer-songwriter creating music that encompasses many different musical facets. The ever-changing styles of genres used in the music of the songs and the changing from keyboard to guitar as the main instrument helps add a lot of variety to the latest album from Georgas while giving the listener plenty to enjoy throughout the 11 tracks that make up the self-titled release.

Click HERE for the video of “Robotic” by Hannah Georgas live at The Juno Awards 2013.