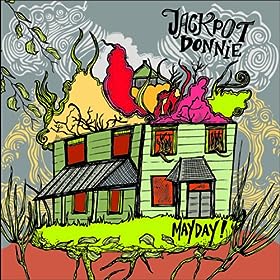 a rising amount of bands and artists out there today, Chicago’s Jackpot Donnie is a band that creates its sound by combining several genres of music together. It’s the combination of Reggae, Funk even Blues that helps give the band’s music its quality and sound. And because the band draws from these unique and varying styles at different times, the Rock and Roll produced by Jackpot Donnie changes from one tune to the next.

On their newest five-song release, Jackpot Donnie wastes no time in getting the energy moving. The first track off the EP is “Juju”. “Juju” is a track that finds the band bringing together their various Rock music influences to help form the music to the Hard Rock song. The strong vibe on the track indicates that the band can truly “rock” when they want. The track would easily fit on any Modern Rock station and the track is strong enough to satisfy any Hard Rock/Modern Rock fan. And the choice of creating a song around magic or witchcraft (AKA “juju”) is different enough to set the band apart from other modern-day Rock bands.

The band immediately changes the direction of their music on the next track. While “Juju” is Modern Rock, the track “What on Earth” takes the band into a more Jam Band-oriented state of mind. While Adam Campbell, Dave Langley, Matt Love and Brian Wise help give the song its Jam Band feel, the keyboards of Peter Spero are what ultimately make the song. Spero’s keys help add some texture but also add that calypso ingredient of steel drums. The groove on the EP’s “title track” of “What on Earth” is very infectious and with the combination of both Rock and Reggae in the music, the song would fit on either Top 40 Radio formats or Hot Adult Contemporary stations.

Mayday! continues with the song “Hindsight”. On the track, the band returns to a more straight-out Rock feel. This time, however, the band seems to have brought some Funk with them that helps to flavor the music. The guitars and organ on the track help to add that funky vibe to the song and that helps to add energy to the track. The track about looking back is just as infectious as the tracks that came before and the song will have the listener jamming along with the band.

The newest release from Jackpot Donnie continues with the track “Step Back”. With the song, the five members of the band apparently “step back” in time as they create a song that seems to have been influenced by Rock Hall inductees War…except that this song has a heavier approach than most of War’s songs. The band also seems to have found a message worthy singing about that also takes the feel of the song back a few decades. The song’s message about examining what you are being told is something that would have been in the music of the late sixties/early seventies and is once again very apropos give the current political climate.

Jackpot Donnie brings Mayday! to a close with the track “The Art of Mixing Colors”. While the majority of the release has a very strong energy to it, this track features a more laid-back approach with both electric and acoustic guitars mixed together to create a song that sounds as if it could be a “lost track” from the album Cracked Rear View from Hootie & the Blowfish. The pop/rock feel of the music, coupled with the fact that Jackpot Donnie vocalist Matt Love sounds like he is channeling Darius Rucker on the song and the fact that Jackpot Donnie and Hootie & the Blowfish have the same basic make-up as far as the bands are concerned help to make that comparison more than apparent…at least, to this reviewer.

While many reviews of current releases would mention that one song on an album is stronger than the rest and should be “singled out” as the track to promote the release, it is nearly impossible to do with  from Jackpot Donnie; it’s nearly impossible because the entire release is very strong and no one song really sticks out as being better than the rest. The five songs on Mayday! are all worth discovering and with how strong this release is, Chicago’s Jackpot Donnie is a band that is definitely worth checking out.

Click HERE to hear “What on Earth,” the first single off of Mayday! from Jackpot Donnie.