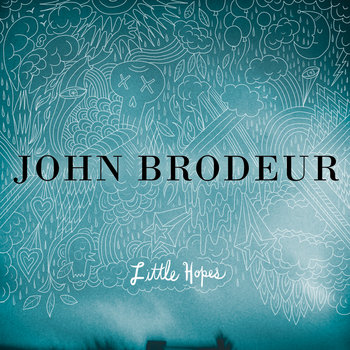 New York-based singer-songwriter John Brodeur has been creating music for around two decades. While he has spent time as part of bands like The Suggestions and Maggie Mayday, Brodeur is known mainly for his solo work. Currently, Brodeur’s musical library includes several EPs and the albums Get Through from 2009 and his 2000 album Tiger Pop which was given the reissue treatment when the album turned 10 years old. The Tiger Pop Ten release included one CD that included the original recordings from the album and another CD that included brand new interpretations of those same tunes. Later in 2011, Brodeur also released a compilation of early music under the title of Young Man, Volume One: Studio Recordings 1994-98.

With the exception of 2011’s Tiger Pop Ten where John Brodeur took his previously composed songs and rewrote them to give them a fresh feeling, he had not released a new album since 2009’s Get Through. That probably had to do with his one-man band way of creating music. And while other people who go the singular voice route of creating music end up making songs that turn out two-dimensional, Brodeur is one of the best when it comes to creating music on his own and the music he creates ends up being just as full and fleshed out as if it had been created by an entire band. Nonetheless, it has been four years since a completely new release had been put out by Brodeur. Recently, he remedied that by releasing a new collection of music entitled Little Hopes.

On Little Hopes, John Brodeur is in fine form as he returns with a new release that features the power pop he has become known for. And like the previous albums that Brodeur has put out, there is plenty of variety in the styles of the songs that have been included on the album.

Little Hopes begins with the track “Be Careful”. A track that sets itself apart from the remainder of the album by being one of only two tracks that feature more than just Brodeur on the instrumentation, “Be Careful” ironically ends up feeling very sparse as Brodeur takes a nearly a’capella approach to the music of the track with only a bass and handclaps providing most of the music for the majority of the track length. The main focus is on the vocals that are provided by Brodeur and Kristin Fayne-Mulroy as they sing the merits of being cautious.

The newest release from John Brodeur continues with the song “One Man Army”. While “Be Careful” is the track on the album with the least amount of music behind it, “One Man Army” is one of the strongest tracks on the release. The song features a full, rich musical feeling to it and truly brings out Brodeur’s abilities as a songwriter; it is a song like “One Man Army” that ultimately displays his ability to create music without the need for other outside influences to add to the richness of the music. While there is still plenty of music to get through before the album comes to an end, “One Man Army” is still one of the best tracks on the Little Hopes release. And of course, the irony in the line “No one has to be a One Man Army” is a song from a musician who creates his music all on his own should not be lost on anyone.

With this new album, John Brodeur wanted to create songs that had the themes of hope and optimism running through them. Nowhere are those themes more apparent than on the album’s “title track” of “Dig”. The passage of “Dig for Your Soul Like it’s Buried Alive / Dig Until Light Comes Through The Other Side” gives a strong indication of the hope that Brodeur writes about throughout the tracks on the album. Musically, Brodeur seems to have the taken the song back a few decades as the musical influence for the “pop” music contained on the track all but screams Leo Sayer. The vocal delivery from Brodeur along with the piano-based music brings to mind songs from Sayer’s repertoire like “Long Tall Glasses” or “One Man Band”.  And the imagery of the lyrics also seems to indicate writing from another era in musical history where the lyrics were just as important as the music itself.

Another track that stands out on the Little Hopes release from John Brodeur is the song “Favorite Feeling”. On this track, Brodeur brings back more of the rock feel found on the track “One Man Army”; although, the track still contains a fair amount of “pop” influence, as well. The “pop” influence comes in the form of the “hook” of the song that will have the listener singing along with Brodeur almost immediately. Like the other songs already mentioned, “Favorite Feeling” is one of the strongest moments on the new release from John Brodeur.

Within the Little Hopes release, there are many different styles of pop/rock to choose from. Each of these tracks shows off the sheer talent and many different sides to John Brodeur. But no matter which song you listen to, it is ultimately about the music that Brodeur produces. And with the release of Little Hopes, Brodeur makes it look so easy.

You can hear the entire Little Hopes release from John Brodeur HERE where you can also purchase a copy of the album.

Click HERE for the video to “Favorite Feeling” from John Brodeur off of Little Hopes.