Singer-songwriter Michael McDermott has been busy as of late. Within only a few months, McDermott released an album under the moniker of The Westies, a band that included Heather Horton, McDermott’s wife. The resulting music from that band sounds like a combination of Springsteen mixed with a little Eddie and the Cruisers thrown in for good measure. The rock and roll release from The Westies is called Six on the Out.

Right around the same time that McDermott was recording music for the Six on the Out release, he was also recording other songs that were to be used for his newest solo release. And since the same group of musicians were used for both the Six on the Out album and the new Willow Springs release from Michael McDermott, the two albums have the same basic musical approach in their songs, but the tracks used for each album had their own feel to them. With Six on the Out, the tracks stuck to a more rockin’ feel to the music while the tracks for Willow Springs stick more to a singer-songwriter approach.

Willow Springs from Michael McDermott begins with the title track of the release. “Willow Springs” features an acoustic guitar-based feel to the folk-rock music. The six-minute track shows off the Bob Dylan influence that appears in some of McDermott’s music. The lyrics of the track contain a very deep Bob Dylan feel as they come across as something that Dylan would have created.

Michael McDermott and company pick up the pace and the energy of the music on the song “These Last Few Days”. While the folk-rock track sides more with the folk influence, it’s the unforgiving beat to the track that gives the listener the illusion that there is much more energy than the folk influence will allow. “These Last Few Days” is a strong track that will get you clapping along with the music.

Having already released the Six on the Out album as part of The Westies, Michael McDermott had penned an entire album of songs that had to do with the subject matter of the tough and grimy side of life where the criminal element can be found. The track of “Getaway Car” from the Willow Springs release is yet another track that has that same type of subject matter. Since the track seems to have a slightly easier pace to the music, McDermott included it on this album.

One of the most powerful moments on the Willow Springs release from Michael McDermott has to belong to the track “Butterfly”. Like many of the tracks that can be found on the album Six on the Out, “Butterfly” is a track that focuses on a moment in time and what happens afterward. The track is about the pain of what happens when you love someone, even when that person may not be the best person to fall in love with. “Butterfly” is a bittersweet track that all but drags you into the moment as you experience the same pain the singer feels.

In much the same way that “Butterfly” features lyrics about loving someone who may not be the best person, “One Minus One” is a track that also deals with the pain sometimes found in relationships; more specifically, relationships that come to an end. The slow-paced track features piano and acoustic guitar as the basis for the backing music on the track. The track features a duet-like approach to the lyrics as McDermott is joined on the track by his wife Heather Horton. Together, the duo create one of the most touching moments on the entire Willow Springs as they sing about two people going their separate ways.

After returning to an easier pace to the music after the more upbeat track of “Let a Little Light In,” Michael McDermott finishes out his newest album with the track “What Dreams May Come”. The track features an easy pace to the music and a very reflective nature to the lyrics as McDermott sings about the different types of dreams and where they take you. The track is a very strong moment on the album and a really nice way to wrap up the newest release from Michael McDermott.

Willow Springs, the newest solo album from Michael McDermott, shows a slightly different side to McDermott than his previous album of Six on the Out, the album released under the moniker of The Westies. The singer-songwriter side of McDermott shines through on Willow Springs and the album contains many moments that the listener will enjoy.

Click HERE to check out the video to “What Dreams May Come,” a track from Michael McDermott.

Click on the album cover to purchase a copy of Willow Springs from Michael McDermott. 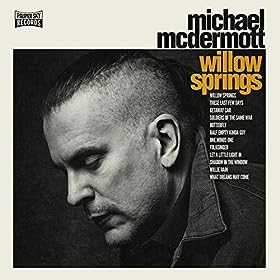