In a time when many recording artists are creating music that focuses on the pop side of things in order to appeal to the widest audience possible, there are others who still want to create the full-fledged sound and feel of real Rock and Roll. One such band that focuses their efforts on creating real Rock and Roll is the band Stubborn Son.

The Seattle-based Stubborn Son is a trio consisting of guitarist and vocalist Garrett Lamp; bassist and vocalist Andrew Knapp and drummer Blair Daly. Together, the three musicians create Rock and Roll sound that takes the listener back to earlier times as their style features a large amount of Blues influence. Stubborn Son’s Blues-influenced music is brought to life with the help if Martin Feveyear who seems to bring out the best in the band. The resulting collaboration can be found on Stubborn Son’s 2015 release entitled Birthright.

Birthright from Stubborn Son begins with the track “The Broken Heart Proof”. The track begins with Garrett Lamp and Blair Daly creating a Black Keys-inspired, guitar-and-drums approach to the song. The Blues-Rock sound created by the duo soon becomes even stronger once bassist Andrew Knapp adds the bass to the track. As the duo becomes the full trio, the track’s Blues-Rock sound gains a strong, driving feel to it. “The Broken Heart Proof” would feel at home with anything from the early Rock And Roll as it would with today’s bands.

Stubborn Son slows the pace of their music just a little bit with the track “Make Believe”. And while the track is slightly slower than “The Broken Heart Proof,” no energy is lost. The three members of the band add even more Blues influence to their playing and this sound brings to mind the musical approach of someone like Cream. “Make Believe” gives the listener the best of Classic Rock with just a little modern-day influence, proving that the sound of Stubborn Son is the perfect bridge between Classic Rock and modern-day Rock and Roll.

With the next track on their Birthright release, Stubborn Son creates a track with a very modern feel. While still containing plenty of Blues in its style, the track “Catch Me Runnin’” feels somehow modern. And just like The Black Keys or The White Stripes, this track would easily feel right at home on today’s Top 40 radio. “Catch Me Runnin’” ends up being one of the strongest tracks on the Birthright release.

Changing directions just a little bit, Stubborn Son adds a lot more Blues influence to their song “Thick As Blood”. The track has so much Blues influence that it feels like a Blues track. On this track, vocalist/guitarist Garrett Lamp plays his guitar with a slide which adds to that Blues feel. The Power Blues created by the trio allows the listener to hear the talent and abilities of each member of the band.

While many of the tracks on Birthright from Stubborn Son come close to Blues but still contain that Rock and Roll edge, the track “Vixen” finds the band coming very close to creating a straight-out Blues track. The slow pace of the music and guitar solo on the track from Garrett Lamp makes the song sound very Bluesy. To take the track over the edge into the Blues, the lyrics of the song contain just the right amount of pain.

Staying in the same Bluesy frame of mind as “Vixen,” the track “Voices” also finds Stubborn Son creating a very mournful track. The track’s musical feel seems as if it were influenced by the classic song “House of the Rising Sun”. Singer Garrett Lamp brings plenty of Blues influence to the song as he sings of the voices in his head slowly driving him crazy. Along with the Bluesy feel, the track also seems to contain a certain amount of influence from Classic Rock band Iron Butterfly. In fact, there are several moments in the song where some vocalizations on the track bring to mind Iron Butterfly’s Doug Ingle as he sang on the song “Iron Butterfly Theme”. At nearly six minutes long, “Voices” is yet another strong track on Birthright and one of the best tracks on the album.

Throughout the ten tracks that make up Birthright from Stubborn Son, the three musicians of Garrett Lamp, Andrew Knapp and Blair Daly prove that The Blues is far from dead. The resulting Blues-Rock from the band not only keeps the style alive, but it also pushes the style and keeps it fresh. Birthright from Stubborn Son is a great album that would be great for any lover of Rock and Roll or for those who enjoy the Blues. And with the blending of the two styles on the Stubborn Son album, the release could inspire people of the Blues musical mindset to explore more artists in the Rock genre and vice versa.

Click HERE to check out the video to “The Broken Heart Proof”.

Click the album cover below to purchase a copy of the release. 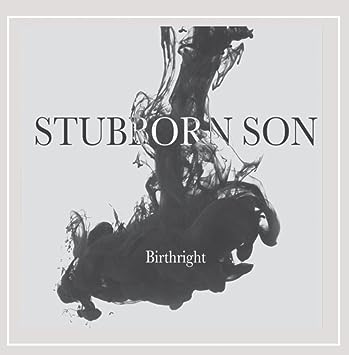