During the history of Rock-N-Roll, there have been many changes as styles and faces have come and gone. And while these styles and faces last for only a while and are gone, what they leave behind changes the path that the music was on forever. One form of rock that helped define the sound of the music (at least for a little while) was Glam Rock.

Glam Rock existed throughout most of the seventies and even into the eighties as some bands continued to create new sounds that would further the genre. When songs like “Boogie Fever,” Funkytown,” and “Staying Alive” were creating a stir in the dancehalls as part of the Disco revolution, people like Alice Cooper, Slade and Gary Glitter were donning outrageous outfits and putting on makeup while putting on wild shows on stage. While Glam Rock was a lot more popular over in England, North America still experienced some of the excitement as songs like “School’s Out” by Alice Cooper and “Rock ‘N’ Roll Part 2” by Gary Glitter did make it onto FM radio over here, if only to moderate success.

While Glam Rock can definitely be called a fad in music as it only lasted a little while before it faded, there are some people in today’s music scene who have brought some of the feeling and look of Glam Rock back into the persona of the rock musician. In fact, some bands from that original era can be seen performing today in clubs in the U.S. and around the world. One band from that era that made a lot of noise back then that is still performing today is the band Sweet.

While the name Sweet (or The Sweet, as they are also known) means almost nothing in the United States, this English group made a name for itself as they had hit record after hit record over in Europe, with their success earning them many gold records.

And even if you do not know the name Sweet, you may know one of their songs: In the movie “Wayne’s World,” at the end of the movie when Wayne and Garth do the multiple endings to the picture, the band Crucial Taunt is playing a song called “Ballroom Blitz”. “Ballroom Blitz” was one of The Sweet’s biggest hit records.

The Glam Rock/Glam Metal band was originally formed in 1968 when Brian Connolly and Mick Tucker left another band to form a band that would become known as The Sweet with Steve Priest and in 1969 Mick Stewart joined the band and the lineup was finalized. And through the history of the group, the band went through several lineups; there have even been more than one lineup of the band touring at the same time. Even today, there are two versions of the group; one version still exists over in England, and one completely different and unassociated lineup exists in the United States.

The United States band consists of original member and US band founder Steve Priest: Bass/Vocals, Stuart Smith: Guitar/Vocals, Joe Retta: Vocals, Stevie Stewart: Keys/Vocals, and Richie Onori: Drums. It is this band that just released a live album featuring many of the songs that the band has become known for.

With the passing of both Sweet founders Brian Connolly and Mick Tucker, it is almost impossible to have a band that has the same power and magic that the original lineup had; however, the band that Steve Priest put together to play the band’s hit songs live in concert have the talent to do the songs justice. And although no one else has Brian Connolly’s unique voice, Joe Retta makes for a fine lead singer for this band. Joe’s voice is close enough to Brian’s in quality that nothing is lost in the vocal delivery in the songs.

The new album of “Sweet Live! In America” was recorded at the Morongo Casino in California. While the glitzy style of clothes worn by performers that helped give Glam its name are no longer being worn onstage by the members of Sweet, the songs that helped make them household names in England are all included on this release. And while this album was not created by all of the people who originally created these hits, Steve Priest and the rest of the American version on Sweet have taken the time to make the songs sound fresh and as close to the originals as possible at the same time. One of the biggest differences between the Sweet of the Glam era and the Sweet of today is that Priest has lost much of his falsetto voice that helped create the sound that the band was so famous for. But he still has his singing voice to help add texture to the songs, so the band still has the feel it had back in the seventies.

The music that is here on “Sweet Live! In America” contains songs from the many stages of the career of Sweet, though many of the songs come from the time period in which Nicky Chinn and Mike Chapman were the primary songwriters of the band’s material. This duo penned some of the band’s most popular songs, such as “Blockbuster” and the aforementioned “Ballroom Blitz”.

This live release by the American version of Sweet is like listening to a live Greatest Hits album from the group. And even though American audiences may not be familiar with the majority of their hits, this band still plays the songs as if they were the ones to make the singles that make up the music on this release. One specific song on the release is a live version of “Little Willy,” the biggest song for the band here in the U.S. The song reached #3 on the U.S. Billboard Hot 100.

Only Bassist/Singer Steve Priest is an original member of the band. But it is that connection that separates this band from many other bands that play cover versions of hit songs: With an actual original member as part of the lineup, this band cannot be considered a cover band or tribute band; they are the real deal, and they sound like it.

If you are familiar with the band and their music, this album is a great way to relive the music of a band that should have been bigger here in the United States. And if you are not familiar with the name of Sweet, this album gives you a great starting place to learn about one of the most influential bands in Glam Rock. To find out more about Steve Priest and the rest of the American version of Sweet and their new release of “Sweet Live! In America,” visit the band online at www.thesweetband.com. Or find them on MySpace at www.myspace.com/thesweetband.

Buy “Live In America!” by Sweet at Amazon by clicking on the CD: 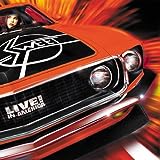