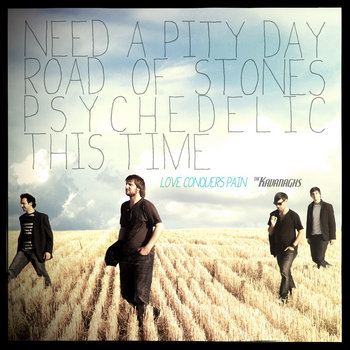 Argentinean band The Kavanaghs has come a long way from their humble beginnings as an Argentinean Beatles cover band. Ever since they started out playing the music of The Fab Four and other groups from that time period, The Kavanaghs have continually shaped their sound to include more and more bands and styles of today so that their current style sounds more like Badfinger and British bands from the late ‘90s into today such as Coldplay, Oasis and U2. Their current sound can be found on their 2011 release Love Conquers Pain. The band is currently promoting that album and has since released several songs from that album as singles; the latest of which is “Need a Pity Day”.

The extended single for “Need a Pity Day” from The Kavanaghs begins, logically, with the title track. While most of the tracks off of Love Conquers Pain were penned by Tiago Galindez, the feature track from this current single from the album is one track that was written by band drummer Seba Cairo and sung by guitarist Ale Pin. “Need a Pity Day” is a straight-out rocker that features the band’s style of rock and roll. During the four-minute playing time, the band creates a solid track that features every member of the group as they seem to use the track as a way to jam together as a group. The extended single also allows the listener to hear a slightly different side to the band, as the featured song/track of “Need a Pity Day” feels different than the majority of the rest of the songs that are found on The Kavanaghs’ 2011 album, Love Conquers Pain.

After the song “Need a Pity Day” comes to an end, the listener is treated to three tracks that were recorded for but not part of the original Love Conquers Pain album from The Kavanaghs. The first of the three tracks is the song “Road of Stones”.

“Road of Stones” is a track that features a slightly slower tempo than “Need a Pity Day”. The easier tempo does not mean that the track lacks energy. The song feels as if the band created a track that belongs with songs from back in the ‘80s. And while there is a generous amount of ‘80s feeling to the song, the British Invasion style of The Kavanaghs also seems to be present, so the resulting track has a dual layer feeling to it as the ‘80s Rock/British Invasion feel to the song creates one of the more complex songs created by the band during the recording session for the Love Conquers Pain album.

With the next track, the band changes styles. On “Psychedelic,” The Kavanaghs seem to harken back to their early days as that Beatles cover band. Along with lyrics that feature very specific visual references that would fit in with lyrics from back during the time of the ‘60s, the music of “Psychedelic” features strings, backward masking and an overall production value that automatically brings back the feeling of that time period. The resulting track has a definite dated feel to it and brings to mind songs that were written by Lennon/McCartney during that time as the two writers/musicians were helping to push the boundaries of the creativity found in the music of the times.

The Need a Pity Day EP from The Kavanaghs comes to an end with the track “This Time”. Once again, just like the track “Road of Stones,” the band slows the pace of the music down. For this track, the band creates a track that seems closer to “classic rock” than anything else. The easy pace of the music gives the listener the chance to just enjoy the playing and talents of the members of The Kavanaghs.

The Kavanaghs are currently in the middle of creating their next album. Until they release that album, enjoy the band’s band’s current CD Love Conquers Pain and the newest extended single off of it, the Need a Pity Day EP.

Click HERE for the official video for “Need a Pity Day” by The Kavanaghs. For more information, check out the band’s label Dreamscape Records.

One reply on “CD Review: The Kavanaghs “Need a Pity Day EP””