Theory of a Deadman hopped into Guelph with a couple truckloads of gear and set up shop in the old Club Denim, now known as the Ragin’ Caygeon. Set to rock the place with 8 Mesa Boogie stacks, a drum riser and enough lights to safely land a 747 in a thunderstorm. I used to frequent this bar when bands like Big Sugar, Finger Eleven and Billy Talent used it as their launching pads. The awesome sound of the old theatre and great view lines make it a perfect venue for large bar sized bands.

The opening band, Parlor Mob, fired up with a set closely resembling a lot of Led Zeppelin and other 70’s classic rock. These guys, as tight and rockin as they were, warmed up the Caygeon nicely but I don’t see these guys making it huge cuz there’s just too many bands out there doing the exact same thing with nothing super special to set them apart from the crowd.

The same has been argued about Theory though. Often compared to the likes of Nickleback, a band which I will go on record again by saying I LIKE THEM and I don’t give a shit what anybody says. I’m not going to let the sheer volume of radio airplay ruin a decent Canadian touring band with a lot of cool tunes and a great show.

That being said, at a glance Theory has a lot of tunes that to me sound identical to a load of other bands but they’ve seemed to found a niche within a niche and has obviously showed something “super special” to set themselves apart. What that super special thing is, I don’t really know, but they are hugely popular in Canada AND the States so there undeniably IS something there.

Their list of hits speaks for themselves. A quick visit to their Myspace site tells you everything in a few numbers. With 30 million + hits on “Bad Girlfriend” alone, you can’t argue with a number like that. The average band is lucky to nail down a few thousand hits to a tune, hell, a few thousand “friends” even…

The hits these guys can pick from keep the song familiarity at a high level even for people who didn’t think they knew any of their tunes. A band like Theory will surprise you as to how many of their tunes you actually know and like. Needless to say I found myself quite surprised at the amount of tunes I knew but had no idea Theory was the band who played them.

People gotta wonder what makes ME a music reviewer. I can’t remember fuck all about most bands, I don’t pay attention to who plays what, unless it’s a band that has REALLY grabbed me by the nuts. And for the most part I don’t give a shit about who’s in the band, where they’re from or how many albums they’ve sold. To me, a good band is a good band is a good band and after seeing Theory do their thing, I gotta say, they’re a damn fine band and they deserve the success they’ve achieved.

Lead singer, guitarist, Tyler Connolly at centre stage, kept the schoolgirls in the front row happy. Meanwhile lead guitarist David Brenner, sporting a beautiful Gibson Firebird and later a killer looking Gibson Flying V painted up in a Vancouver Canucks uniform, and bassist Dean Back kept the music in check with their tight ear friendly melodies. Perched up on the drums was some dude yet to be named on their web sites who held down the timekeeping duties just fine.

I’ve always hated that. You get a band who’s got 4 members on stage but there’s only 3 guys in the pics and the bios and all that shit on their web sites and whatnot. I just don’t get why you’d purposely leave out this “unimportant guy”.. What? Is he that much of an asshole that you really don’t want him in the band? Then why’s he there? He must be serving some purpose. One of my favourite bands, the Trews, does that to their keyboard player who’s been with them for I don’t know how long now. The guy is an integral part of the sound. Take him outta there and see how full the band sounds. Take the drummer outta Theory and you got nothing. No band can make it without a good drummer. Well.. cept the Beatles.

I must say that at the end of it all, if you were one of the people who only paid $35 to see Theory of a Deadman in this very small and intimate venue, you were lucky. Cuz just like so many other bands before them, they’re on route to never have to play this small a venue again.

Buy Theory of a Deadman on Amazon: 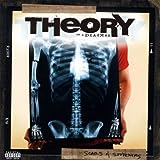