The final weeks of 2015 are winding down. And that means end of the year Best Of lists for music, movies, even books. As a reviewer for the Rock And Roll Report, I found that many of the albums that I reviewed over the year refused to stay quiet, even when time slipped away. These albums deserve to be heard and therefore, have now found their way onto my list for top albums of the year. For this year’s list, I took my favorite Top 10 albums that I reviewed on the site and compiled them. And since I also write album reviews for more than just the Rock And Roll Report, I included 2 additional albums from my blog that also deserve one more mention.

Along with the 12 albums, I also included 10 songs that, like the albums I have included, kept my interest throughout the year of 2015. Most of these tracks can be found within albums included on the list, while 1 (Antigone Rising’s “My Town”) appears on an album that did not make the list. The reason for 10 songs instead of just my usual 5 is that this year happened to contain a lot of tracks that were very strong.

Together, these 10 songs and 12 albums helped to shape the year of 2015 for me as far as music is concerned. Take a look through the list and you may find something you missed out on. 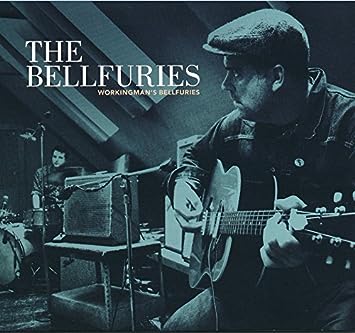 2 Micah Olsan & the Many All Around Micah Olsan is a Milwaukee-based singer-songwriter who creates music that has many different musical influences to it. Micah Olsan is joined by four other musicians that seem to have the same creative drive to their playing ability. Together, this band has created a five-song EP called All Around. Micah Olsan and the Many have created a release in All Around that draws from many different styles and that helps make the EP enjoyable from the very first note until the very last one. The five songs and twenty minutes seem to be over way to quickly but that only makes the listener want for more. Find the entire review HERE.

3 Black Rainbows Hawkdope Black Rainbows is a Fuzz Rock band that makes its home in Rome, Italy. Together, the trio creates some of the most psychedelic, hardest-hitting and coolest music out there today. If you are a fan of bands like Black Sabbath, Monster Magnet or even Hawkwind, Black Rainbows is a band you need to check out. After releasing several strong albums, Black Rainbows returns with their latest album, 2015’s release entitled Hawkdope. Black Rainbows is a strong release from the very first note. For those looking for bands that make Rock and Roll that is meant to be heard through headphones, Black Rainbows is one band that fits that description. And with the band already having a nice library of releases, Hawkdope is a nice place to start before digging into the rest of the band’s output. Find the entire review HERE.

5 No More Kings III No More Kings is a Los Angeles-based rock outfit. The duo consists of Pete Mitchell on vocals and Neil DeGraide on almost everything else with a little help from some friends to help solidify the band’s sound. The duo formed while they were still in high school and they started writing songs around certain themes. When listening to an album from No More Kings, the band will cover concepts like zombies, karate and other ideas that will bring about a certain amount of nostalgia for the listener. III, the newest release from No More Kings, finds the band drawing many different musical influences from the past. And while that is the case, the band’s music is as fresh as anything on today’s radio dial. Find the entire review HERE.

6 Tim Kirker Shallow End of a Deep River It was in the city of Cleveland, Ohio that Tim Kirker got his start as a musician. Among other things, Kirker shared the stage with lead Nine Inch Nails member Trent Reznor. Reznor and Kirker were part of the same group called Slam Bamboo who had a Top 40 hit song in the Cleveland area called “House on Fire”. After releasing his first solo album of Like Distant Sounds in 2003, Kirker would take some time off. Having returned last year with Worms for Early Birds, his newest album in over a decade, Kirker returned once again in 2015 with yet another new release entitled Shallow End of a Deep River. While it’s been quite a while since Tim Kirker’s Like Distant Sounds release from 2003, the strength of the songs in the new album make up for the time between releases. Shallow End of a Deep River, the new release from Tim Kirker, is one of those rare finds where you simply put the album on and let it play out without skipping a single track. Find the entire review HERE.

8 Lindsay Mac Animal Again Lindsay Mac is a classically-trained cellist. After her training on that instrument, she took that ability and started creating her own music. And while it would have logical to imagine Mac creating albums based in classical music, she went in a different direction. The music Lindsay Mac created was folk-rock based. That was back in 2008. Today, Lindsay Mac has been incorporating a new style into her sound. That sound falls into the category of Electronic Dance Music. While the new sound from Lindsay Mac is miles away from the cello-based folk-rock that she had been previously known for, the new EDM-based pop music she is currently creating is very strong. The songs on Animal Again are just as well-written as anything from Mac’s previous releases and the production value on the 2015 EP is solid. Animal Again is a solid first release in this musical vein for Lindsay Mac and more of the same is definitely welcomed. Find the entire review HERE.

9 Rocket 3 Burn Portland-based band Rocket 3 is a three-piece rock outfit that features the playing of Guitarist, singer, and songwriter Ramune Nagisetty; Drummer Drew Anymouse and bassist Tony Guzman. Each of the three musicians found their way to Portland from different parts of the country only to discover each other in Portland and from there they put together a band that combines different genres of rock and roll to create their sound. Rocket 3 is currently promoting their current album entitled Burn. Burn from Rocket 3 is a strong release from the very beginning. The album contains many strong tracks and each track shows off the talents of each member of the band. Find the entire review HERE.

10 The Armory Rediscover Many of today’s rock bands that are out there selling out music venues are filling up those venues and radio airwaves with a pop-inspired style of rock and roll. The Armory is a pop-based rock is mainly to ensure music sales. Along the way, that pop-based sound replaced the real rock and roll that was being created only fifteen years ago; but every once in a while, you will find a band that still brings the energy that many seem to have lost. One such band that still has that strong rock edge to their music is The Armory. Throughout their current release of Rediscover, The Armory changes musical directions from one style of rock and roll to another and that mix makes a great release with many strong moments throughout the album’s nine tracks. The ever-changing sound and style of the band’s music on the release keeps the album strong. Find the entire review HERE.

12 The Get Ahead Volcano Portland, Oregon seems to have no shortage of good bands that are producing some really good stuff to listen to. One of those bands that are currently creating some joyful noise in that city’s music scene is The Get Ahead. The Get Ahead creates music that combine the best of artists like Sam & Dave and James Brown & the Famous Flames with a few other styles of rock and roll to create a fresh take on the music. There are other artists out there today that create R&B music, but very few can create songs that feel like the stuff that was created by artists like Sam & Dave or even James Brown. The Get Ahead is one group that seems to have figured out the right way to create the music while giving it their own spin. If you are a fan of R&B and/or Soul music, give The Get Ahead and their album of Volcano a listen. Find the entire review HERE.

1 Lindsay Mac “Back to Right”

2 The Bellfuries “Why Do You Haunt Me”

8 No More Kings “Zombie Me”