Taking their name from an epithet hurled at Han Solo by Princess Leia in the Star Wars movie The Empire Strikes Back, this band of nerd rockers (made up of singer/guitarist Parry Gripp, drummer Steve “The Cougar” Sherlock, and bassist Charlie Dennis) is now entering it’s second decade with all members intact, no small feat in its’ own right considering popular bands today go through more members than your typical McDonald’s in a six-month timespan. Those who are fans of the band and have heard some or all of their previous output are in for no real surprises here. The band’s nerdy sense of humor is intact, which you can gather from some of the song titles on this new release: Golfshirt (Part2), (Stand By Your) Manatee, Led Zeppelin Rules, and I’m Not A Loser among others and the band’s sound is the same pop-punk they’ve been pushing for years.

Those who love the band may find the band’s sameness familiar and welcoming, but those who are new to the group may find their allegiance to ’90’s rock off-putting and cloying, seeing as other bands playing the same sort of pummeling pop-punk (say, Green Day) have matured somewhat and found ways to advance themselves artistically while still keeping their energy and Nerf Herder has not. Or, like veteran rockers AC/DC, the band could just keep playing the same type of thing over and over, riding the ups and downs for as long as they can. Surely, the band has the talent to do more, but for better or worse the band doesn’t seem to want to change up their sound. If you enjoy Weezer and The Presidents of The United States and how these two bands sounded in the ’90’s, then you’ll probably like Nerf Herder as well though if you already have a couple of their albums, you probably won’t need this one. Just give their old songs new titles and you’ll save yourself fifteen bucks and pretty much have everything you need from them. 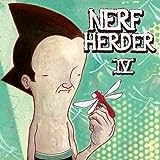