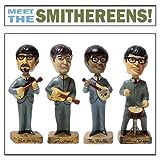 When I first saw this CD at my local CD store, I was immediately intrigued but then thought to myself, “Damn, another band is doing some sort of Beatles tribute – can’t people write their own songs and quit giving tributes to the Beatles?” but after picking it up and enjoying it immensely, I have softened my approach to Beatles’ tribute records. At least, this one anyway. I mean, let’s face it: The Beatles are the biggest act to ever hit rock and roll and as far as influence, no other acts or stars come close except maybe Elvis Presley or Chuck Berry. The problem is, the constant covering of Beatles’ songs has been a fad since the ’60’s when the Beatles were still recording albums. The band’s songs have been recorded ad infinitum in every musical genre and sub-genre ever created, from jazz to polka to classical and on and on. So, after encountering this musical over and over again, I have begun to feel as if it is a cliche to cover Beatles songs and the advent of tribute albums in the ’90’s has only made it worse. Scores of tributes to the Beatles have been made and even tribute albums dedicated to certain albums in the Beatles canon. I have wondered many times if the careers of the artists who have done these tributes would be farther along and have more noteworthy moments had they instead invested their time in creating their own song or songs to replace their Beatles cover experiments.

Still, all that being said, I do have to admit to liking this tribute to the first Beatles album by The Smithereens.

It doesn’t hurt that the Smithereens have been one of my favorite bands for about twenty years now. When their big hit “A Girl Like You” was played on MTV incessently in the ’80’s, I became a fan of the band’s singularly buzzsaw-like brand of power pop. The sight of a leather-clad, goateed Pat Dinizio slamming his world-weary lyrics against heavy guitars ala AC/DC to form inescapable hooks with a pounding rythym section made me feel as if all the overblown, dissonant college rock had actually led to something. The band was first formed in 1980 when DiNizio came into contact with New Jersey high school students Dennis Diken (drums), Jim Babjak (guitar), and Mike Mesaros (bass), who had all played together in school. After releasing several EPs, Dinizio became disillusioned about the band’s lack of wide success and considered packing it in before a demo sent to indie label Enigma attracted attention at the label and eventually led to the band being signed. The band released the Don Dixon-produced album Especially For You and garnered a minor hit with the song Blood and Roses which was featured in a B-movie. The band received much exposure through MTV, which played the video for the song often. Their next album, Green Thoughts, contained the hit “Only A Memory” and paved the way for the Ed Stasium-produced album 11 which gave them their biggest hit with the song A Girl Like You.” Though they released several more albums in relatively quick succession, that was the band’s high point, and the end of their hits but the beginning of their status as a cult band, which has continued to this day through a series of studio and live albums.

The fact The Smithereens have decided to tribute the first Beatles’ album makes a statement for the original album’s importance, not just to the Smithereens but also to the world. At the time the Beatles first started in the early ’60’s, a lot of people were saying rock and roll had died. Most original rockers such as Chuck Berry, Buddy Holly, and Elvis Presley (to name a few) had begun to go through changes both in their personal lives and their careers. Presley had suspended his career to join the Army, Berry and fellow rocker Jerry Lee Lewis went through court problems and scandals, Little Richard had disowned rock and roll and temporarily went back to the ministry, Holly and a few of his compatriots had died in a fatal airplane crash. The list goes on. What replaced them was not bad, but was not considered real rock and roll. Rock and roll replacement artists like Frankie Avalon, girl groups such as The Shirelles and the beginning of Motown all had their respective merits, some more than others, but those interested in guitar-heavy, pounding rock and roll were left without many options until the Beatles and the groups following in the wake came along. Where America had already begun to disown the blues and other, less slick forms of R&B, England and other Eurpoean contries were still embracing it. The Beatles covered Chuck Berry and Carl Perkins (they were master cover artists themselves as their first few albums attest, so maybe all these Beatles covers are somewhat fitting)
and many other early rock and roll artists and people adored it as if the songs were new. To the Brits, who had no real rockers of their own and got their rock and roll vicariously thorugh us, they were new and The Beatles claimed rock and roll for all Europeans. When the Beatles’ released this album and singles started to chart, rock and roll was back! A momentous occasion to be sure and one still causing ripples today.

In typical Smithereens fashion, the band romps through these classics with their usual energy and skill. While most would say a Beatles’ song could never be improved, Dinizio, Diken and band add some modern rock and roll raunch to the classic Beatles’ blueprints. While the band rightfully honors the Beatles’ arrangements and really does not alter the songs too much, there is an oomph the band manages to give these warhouses that is needed to goose these songs for today’s listeners. While you;d be hard pressed to find a music fan who absolutely hates the Beatles, the advent of metal and grunge have made many wish the Beatles’ songs would be a little more “amped up” as it were. Sure, songs like “Birthday” and “Revolution” still sound relevant when heard on the radio but there’s something about the other songs which has suffered through time. Though recorded on the best equipment at the time and with possibly the best music producer ever, George Martin, at the helm, innovations in sound and recording process had aged these songs, no matter how many times they are remastered. Though these songs are nothing new, The Smithereens rise to the occasion and give these classics new meaning. Dinizio sings the hell out of the these songs and the rest of the band antes up as well, rocking out as if their lives depended on it.

Though some might say this album (and albums like these) may be unnecessary (especially if you have the Beatles’ versions of these songs already) I beg to differ, at least in this case. While I feel that way myself most times and people who also feel that way do have a valid argument, one only would have to listen to this album to hear the sincerity behind this collection of songs. This is not a must-own or a groundbreaking album people are going to be talking about for years and years. This is just an album that will make you smile and remember the first time rock and roll played a major part of your life. To me, that’s enough.