I am getting to this release pretty late as it’s been available for about a year now, but let me tell you, since this is some of the better power pop I have heard in about a year, I am going to forgive myself and enjoy both listening to this release (it’s playing on my stereo now) and telling you about it so you can pick it up and listen to it yourself.

Chicago trio TennisCourts features guitar-pop veteran Wes Hollywood and two-thirds (the rhythm section) of the members of his old backing band The Wes Hollywood Show, giving this band both the fresh sound of something new yet the tightness and fluidity of a band that has been fighting the rock and roll wars for years, which they have since The Wes Hollywood Show formed in 1999. That a band has been able to sound this good yet languish in obscurity for so long says much about the current state of the music business and the prejudice against the power-pop movement. Let’s face it: power-pop is the most maligned subgenre of rock and roll ever. It’s considered too crunchy and rocking for the crowd who likes teeny pop bubblegum yet too wimpy by those who like to headbang. As a modern descendent of the same kind of music The Beatles laid down in the ’60’s, the genre has also had to carry the stigma of being considered disposable, which is weird because that means a band as talentred as The Beatles (with music still revered today) probably wouldn’t succeed in this day and age and would have been marginalized as a catchy, clever, talented-but-still-cult band their entire career. Such is life.

It’s to the band’s credit they do what they love and do it so fucking well they might succeed despite shitty radio! Where The Wes Hollywood Show had a more ’80’s retro sound, sort of like Elvis Costello or Joe Jackson crossed with the Kinks, TennisCourts takes those same refernce points and adds some modern twists to them – updating their music while retaining an extremely catchy melodic sense with some slight sonic quirks to spice up their sound. 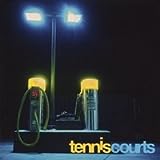