Seattle-based singer/songwriter Gary Reynolds and his band, The Brides of Obscurity, have extraordinary plans for 2010: they plan to release a song a week and a full-length album a month throughout all of 2010. Yes, you read that correctly. The band will release fifty-two songs and twelve full-length albums this year and to keep things fresh the tracks will range in style from psychedelic indie-rock to power-pop to folk-inspired numbers.  So genius or madman? Read the interview, hear the tunes and make up your own mind!

Q: Wow! Tell us about the inspiration behind choosing to release 12 albums this year.

A: I came up with this concept of releasing a song a week. Basically, I’ve been playing music for a long time and officially, what happens is, in the past I would record an album. I have three “Chronicles” – Cretin Chronicles volumes 1, 2 and 3 – those were what I did in my college days and they’re Brit-poppy psychedelic garage rock. Remember the “Pebbles” series that came out?

END_OF_DOCUMENT_TOKEN_TO_BE_REPLACED

No, the title of this article is not an exaggeration. Ever since Alberta’s The Dudes released their album entitled Bloods, Guts, Bruises, Cuts they’ve been cursed with all of the above. What exactly happened? Brace yourselves for this unbelievable sequence of events!

A week before the band set off on their Canadian tour lead singer/guitarist Dan Vacon took a ride on his BMX bike and ended up with twelve staples in his head and a broken collarbone.  A month later drummer Scott Ross rode the same bike, only to end up missing three of his front teeth, a bunch of his face and a piece of his moustache (the accident took place at the same intersection as Dan’s!). And that’s not nearly the end of it! Vacon then crashed into a tree while skiing and broke the other side of his collarbone. AND, last, but certainly not least, while hailing a cab during a blizzard, Ross slipped and got dragged thirty feet underneath the bumper of an oncoming car and busted both his knees.

Now, things seem to have settled down and The Dudes are back to rockin’. Here’s what Vacon had to say about the band, their new album, all the madness and … tattoos.

Q: Let’s start off with how you guys got together as a band?

A: Ok. It started off with me and Bob in high school and we actually made the band for the talent show. We wanted to just rule the talent show and funny enough we didn’t make it to the second round, and the girl who won actually sings the national anthem at the Flames games now.

END_OF_DOCUMENT_TOKEN_TO_BE_REPLACED 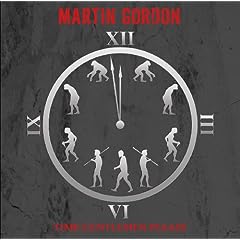 Martin Gordon is ringmaster in the grotesque pop circus known as Time Gentlemen Please. After his last album, we pick up where we left off. The combination of guitars, brass, ukulele provide the raucous opening to the absurdist “Elephantasy.” Only a talent like Gordon can make a song about alcoholism with the lyric “It’s official, we’s a hero/but I’d be happier drinking a beer-o.” Gordon’s melodic talents and pessimistic viewpoint make him the perfect combination of XTC and Randy Newman. Fans of 10cc will also enjoy the catchy “On and On” layered with bright harmonies. Another standout is a dark prog ballad version of The Beatles “I Feel Fine.”

The influence of Zappa is sprinkled throughout here and there. The deliciously un-PC “If Boys Could Talk and Girls Could Think” and “Talulah Does The Hula From Hawaii” are a lot of fun and will get you humming. With 16 tracks, some tunes work better than others and Gordon sparkles when he moves beyond novelty tunes. A great example of this is “Incognitio Ergo Sum,” a depraved celebration of celebrity culture. And I love the “Lady Madonna” bass line thrown into the catchy “Passionate About Your Elevator” too. If you prefer your rock/pop to have a sharp wit, look no further. Born on the bayou of Lake Charles, Louisiana, Research Turtles are a band with buzzing British Invasion styled guitars layered on top of Foo Fighters styled grunge pop. It’s a natural mix that takes elements of the past guitar greats (Beatles, The Who) and fits it into chunky rock melodies that grow on you like moss on a tree.

Founders Jud and Joe Norman channel the melodic magic on the opener “Let’s Get Carried Away.” The heavy guitars plunge listeners into the Green Day-styled “Damn” full of both distorted guitar solos and harmonic choruses. “Mission” is a great straight ahead power pop single that should garner attention from a few radio stations that value good music. The southern style of the band emerges on the power ballad “Kiss Her Goodbye” and aggressive guitars race ahead on the excellent “Cement Floor.”

It tends to bog down on “The Riff Song” into a Led Zeppelin-esque gumbo of riffs and vocal distortions. The sweet “Into A Hole” is another highlight, with both melody and riffs on equal footing. The musical hooks tend to take a back seat on the albums second half, but for a debut this is more than enough to get excited about. Fans of Teenage Fanclub, You Am I and Bowling For Soup will also find a lot to like about these Turtles.

It’s not often you come across a band that has, yes, six members. On top of that two are dating, two are brothers, and it still all manages to work out wonderfully. Sound impossible? Not for California’s Family of the Year who are one such band. The self-professed indie-rock-folk-Americana songsters have just released their debut album, Songbook, and seem to be charming their way onto everyone’s iPod. If you haven’t heard them yet, SPIN Magazine recommends that you do – and so does The Rock and Roll Report.

END_OF_DOCUMENT_TOKEN_TO_BE_REPLACED

The band’s energetic pop rock made their 2007 debut, Both Before I’m Gone, a hit with critics nationwide and it reached No. 21 on the iTunes charts. The first single off the album, “Clumsy Sky,” even scored them a 2007 Independent Music Award in the ‘Best Song – Punk’ category.
Since then the trio has toured the country and shared the stage with the likes of Frank Black, The Epoxies, and The Eyeliners and in June of this year they released their follow-up album, Trio B.C.

Nina Diaz took some time out from rockin’ to talk about the whirlwind experience that is Girl in a Coma.

END_OF_DOCUMENT_TOKEN_TO_BE_REPLACED

This Seattle based, five-piece retro-pop outfit Curtains For You have the delicious melodies and intricate three- and four-part harmonies that make the hair on the back of your neck stand up. The band consists of Matthew Gervais (guitar/lead vocal), Mikey Gervais (guitar/ sax/ vocals), Nick Holman (bass/euphonium/vocals), Peter Fedofsky (piano/vocals), and Dave Lawrence (drums). Leaning on a big pile of 60’s classic pop influences and structures, they put it in the blender and whip up into a fresh but totally familiar sound.

END_OF_DOCUMENT_TOKEN_TO_BE_REPLACED

Brian Ray calls himself a “Reluctant Rock God and Guitarist” on his MySpace, but what’s perhaps even more impressive is that he’s scored one of the best gigs around: since 2002 he has been Paul McCartney’s bass player and yes, that’s The Beatles‘ Sir Paul McCartney. However, Brian Ray’s extensive career is not to be undermined. He’s accomplished many great musical feats and in the past has played with greats such as Bobby Pickett, Etta James and Smokey Robinson and, more recently, played on Chris Cornell’s solo album. He’s even released his own solo record, Mondo Magneto, and has a second in the works. Brian recently agreed to honor The Rock and Roll Report with an exclusive interview.

Q:  You just finished a tour with Paul McCartney, how was it?

A: BR: Yes, we finished a recent big stadium tour in the US [11 dates] and it was a fabulous time, including the new Citifield Stadium [home of the NY Mets] and the outdoor concert on the rooftop marquee of the Ed Sullivan Theatre [home of David Letterman’s Show].

END_OF_DOCUMENT_TOKEN_TO_BE_REPLACED

Ken Stringfellow is best know for his work with The Posies, but is also a key player in the re-formed Big Star, as well as a respected solo artist. Over the years he has also been a part of many other influential bands such as R.E.M., The Minus 5, and The Orange Humble Band, to name a few.  Currently living in Paris and working on his newest project, The Disciplines, Stringfellow granted The Rock and Roll Report a rare interview.

Q: I know you’ve lived in France for about 5 years now, do you feel like a native at this point?

KS: No, I don’t feel like a native. You have to be one – especially in France. I don’t have an absolutely perfect command of the language by any means. French culture is very particular. When you are in France, even if you speak the language very well, people always can tell. There’s always a “Hmm, you’re not from around here” kind of thing. I enjoy living here and I’ve gotten used to the fact that I’m kind of always a fish out of water in one way, but I have a great life here. It’s not a bad situation to be in.

END_OF_DOCUMENT_TOKEN_TO_BE_REPLACED

The third album from The Brigadier (Matt Williams) continues to showcase his extensive gift of music and melodies. It opens with the impressive and catchy “I’m gonna make you mine Missy” which combines a cutting lead guitar and Beach Boys backing harmonies. This is a bona fide classic track that shouldn’t be missed. Next, “Oh Paddington” is another magical melody with a slight psychedelic overtones and a bit like a lost Klaatu track. Slowly, the album gets funkier beats in “Why don’t you love me?” – with very 70’s style syths and a whispering lead that beckons the listener.

Much of the gentle almost narrative Roger Waters meets McCartney comes across on the tracks in the albums middle. Both “Traditional love songs” and “Ode to Escape” will hold your interest till the very Queen meets Moody Blues flavored “Time is a Wound.” The guitar work is excellent, but often a supporting player here as the mood and intricate harmonies lead the song. It’s my favorite on the disc, too. The songs gradually get both delicate and precious with the melodies and themes, like “Something Good” has a baroque current running through it. This tendency eventually leads us to the Kinks-like burlesque of “Jobseeker” and “(I Like) The Look Of You” with light harpsichord and do-wop chorus. The utterly gorgeous finale of “The Insomnia” is a Brian Wilson/Wondermints aria that tells us the author is begging all his active thoughts to stop and let him sleep.

This is the kind of release that will keep smart pop fans up late nights, playing The Brigadier over and over again.

My Space | CD Baby | Listen on The Brigadier Site