There are many ways in which the internet has changed the shape of the music industry. Small bands and artists are able to self promote through social media and websites. It is also possible for anybody to download the appropriate software to create a music studio on a suitable pc. The list goes on and is almost limitless. Another facet of this is that music enthusiasts like myself can easily set up a website or a social media page and publish articles or blogs online in order to help promote or undermine anything that they so wish to. I am sure that you are fully aware of all of this, the point which I am leading to is crowd funding. This allows fans to pre order albums before their production in order to help cover the costs involved enabling many artists to record, produce and release material which would not have been financially feasible without any crowd funding.

A shining example of this is the double album Flowers and Dirt which was released by Irish Blues Rock Psychedelic Shredmeister/ Glam Punk Sleaze Rock Frontman Bernie Tormé in September 2014. 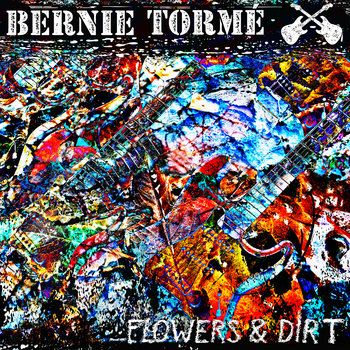 This was his first solo album for fifteen years. It is a brilliant album and undoubtedly it was one of the finest releases in 2014. As a reflection of the earlier part of this article, you can hear my first ever radio interview/chat which I had with Bernie prior to the release of Flowers and Dirt. This was recorded and used in the online radio show which I ran while I was also working with Firebrand Rock Radio. You can listen in to this chat where Bernie talks a little about the Flowers and Dirt crowd funding campaign while also shedding much light on Ian Gillan, Ozzy Osbourne (standing in with Ozzy in the immediate aftermath of legendary guitarist Randy Rhoad’s tragic death), GMT and more besides. Listen to our 2014 chat HERE. It starts at about 50 minutes into the show.

By the end of its run the Flowers and Dirt crowd funding campaign which run through Pledge Music reached a staggering 418%, not only was this great news for Bernie and his fans but also for the childrens cancer trust who Bernie kindly donated 10% of all the proceeds to.

Hot on the heels of yet

Bernie Tormé is now running a new Pledge Music campaign to fund the next album, Blackheart. There is so much on offer that I dare not begin to list it all but it is packed with exclusives. You can check it all out right HERE. For example, the digital download pre order for this year’s album is only 8 English pounds!

You can hear Bernie talking about his 2015 campaign HERE

You can listen to and purchase a great selection of Bernie Torme Material via BANDCAMP and also in my recent podcast show with another interview and a cool selection of Torme material HERE. Check out Bernie’s website HERE