Whether you’ve heard about it or not, there’s a serious buzz radiating throughout the rock ‘n world hemisphere for a small band out of Southampton, England called Band Of Skulls. Perhaps it’s due to their inclusion on the upcoming soundtrack for the heavily anticipated (by some) sequel to Twilight. Perhaps it’s the overbearing curiosity by so many inquiring into whose music they were enjoying during one of the patented sex-heavy scenes on the HBO phenomenon True Blood. Maybe the buzz came abound when iTunes introduced “I know what I am” as their free single of the week causing soon-to-be fans to flock to the digital Mecca. Or the plethora of comparisons with the immensely popular White Stripes.

Truthfully, there are a combination of reasons that could explain the meteoric buildup for Band of Skulls, however, most of the possibilities mentioned above are a direct result of one key ingredient – these cats can rock! It only makes sense that the contributions and talents of all three members meshed together could create something like Baby Darling Doll Face Honey – one of those rare cases of an album exceeding the lofty expectations that preceded with the buzz.

Right from the get-go, the album grabs you and sucks you in with the raw vocals of Russell Marsden soulfully twanging out in tune with determined guitar riffs. Without a moment to fully realize where the ride may take you, the catchy beat put forth by Matt Hayworth leaves you no choice but to sway along and bop your head to coincide with each beat. “Light Of the Morning” may very well be one of the strongest opening tracks I’ve heard in a long time, but for the album, all it does is set the tone for the remaining 11 songs. It flows so smoothly into the band’s latest single “Diamonds and Pearls” that no one could fault you for thinking of it all as one long track broken into two very ear-pleasing parts.

From there vocal duties are split between Marsden and the Joan Jett-like styles of the third leg of this musical tripod – Emma Richardson. The styles of the songs alternate between a cool bluesy vibe to a nostalgic classic British rock to, as mentioned above, a more modern raw wet dream-like White Stripes.

When the first beat of “Fires” carefully plants itself into your subconscious, before you know it you’ll be wondering what happened to the last four minutes. The deliberately slow pace is eerily reminiscent of a Pete Townsend on morphine love song slowed down to a crawl.

The next four tracks all fill the requirements of solid, upbeat music preparing you for the awesomeness of, in my opinion, the memorable “Impossible”. But the actual song is just the penultimate moment leading up to a two minute interlude of the three kicking it into high gear, consistently leaving me with Goosebumps and ringing ears no matter how many times I repeat it. Very few songs have had that effect on me so consistently.

The album concludes with the bluesy “Cold Frame” a beautiful ballad that plays to a laid-back pace without swaying from the rest of the album in terms of intensity and passion. Six minutes that will make you forget about the mediocrity of so many past British acts that never did reach the pinnacle of talent that was expected of them because they never took chances in their music, saturating the airwaves with drones reminiscent of the past.

Which is what makes this album and band so unique. They are distinctly British in their demeanor and style, but they certainly can fall into that category of New York garage rock that seems to have disappeared like an endangered species. The ability to sway between so many different styles without changing the core of their sound means that the album was created to be one giant musical masterpiece as opposed to the just a selection of tracks shrouded by filler. Finding an album with no real weak link is a rarity and a pleasure that should be shared by all. If the expectations prior to the album’s release were lofty, I can’t imagine where they stand now.

You can listen to Bomb on Rock and Roll Report Podcast #57! 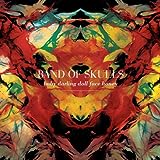 Seth – good piece thanks for the Skulls turn on. I also blogged a bit about them:
http://www.wavedrumor.com/2009/10/band-of-skulls-debut-lp-us-tour-next.html