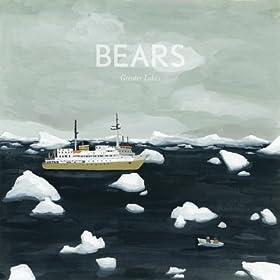 Take two musicians, one from Cleveland and one from Chicago, and you have the band Bears. Bears is a band made up of Charlie McArthur– acoustic guitar, vocals and Craig Ramsey – electric guitar, keys, vocals. These two musicians create their music by coming up with a song as they added more instruments, building on to the music through sound files. When a song is complete, McArthur and Ramsey add it to their newest album. The duo then takes the completed album, adds the rest of the live band, and goes on tour. For the rest of the group, Charlie McArthur and Craig Ramsey call upon Nick Perry –drums, Rachel Hart – bells, percussion, Jared McGrath – keys, vocals and Shannon Sullivan – bass. McArthur and Ramsey and the rest of the band are currently promoting their latest album of Greater Lakes.

Given the creative means in which their music is created it should come as no surprise that the music of Bears itself is rather creative. In fact, the sound and style changes from track-to-track, which keeps the 2012 release Greater Lakes moving in many directions. The creative process also means that the listener is given a release that keeps them anticipating the direction the next track will take.

Greater Lakes from Bears begins with the track “Eleven a.m.”. A song about procrastinating, “Eleven a.m.” begins as a guitar-driven song with a very pop-inspired feel to the music. Soon, the track takes on a more synth-driven feel before settling into a groove that features both the guitar and the keyboard. The lyrics of the song have a simple, yet straight-forward feel to them as if written in a way that suggests being spoken to. The use of percussion in the way of the bells and chimes that are present on the track add to the “pop” quality of the track.

On the next track, Bears picks up the pace and the energy. While “Eleven a.m.” is a song that features both the guitar and keyboard, the song “You’re Going” features a much stronger guitar presence. And although there is a keyboard in the music, it is used mostly as background for the song. The all-around feel of the song suggests something from a few decades ago. You may imagine the song being performed by someone like The Turtles.

“From Good to Bad” is a track that fully embraces the feel of the keyboard. While the guitar is present and adds the base of the song, it is the keyboard that truly shines on the track and creates the New Wave feel to the song. For those who truly embraced the music during the New Wave era, this song will magically transport you back to that time; specifically, the song suggests something that may have been created by Brian Eno or his band Roxy Music.

The track “More Left Out” finds Charlie MacArthur and Craig Ramsey creating a song that has a very laidback feel to it. In fact, the guitar, mandolin and banjo at the beginning of the track create a folk feel to the song. When bass and drums are added to the mix later on, the song becomes a folk-rock track with a quick pace to the music. The light, energetic tempo continues until the end of the track. “More Left Out” has a happier feel to the music than you would expect, given the nature of the lyrics about being ignored, or “left out”.

Much of the release Greater Lakes from Bears has a very retro feel to the music; such is the case with the track “I Don’t Have You on My Mind’. The song has a feeling that would fit right in with music from the 60’s. While not exactly suggesting a British Invasion sound, it does suggest something that may have come from later bands like The Raspberries. “I Don’t Have You on My Mind” is one track on the release that literally screams “single”; you could easily imagine the track getting tons of airplay had it been written back during the 60’s.

Greater Lakes from Bears is a solid release that explores many different sided to pop music. When Charlie McArthur and Craig Ramsey were many miles apart when they were creating this album, the end result proves that their creative process helped them find just the right musical balance when working through their songs.

Click HERE for the video to the song “Eleven a.m.”  from Bears.

Click the links to check out the band’s American label Bloodshot Records and/or their International label Misra Records.

For more music from Bears, check out the band’s Bandcamp account.