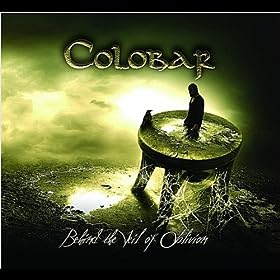 In today’s music industry, too much emphasis is put on trying to fit in and sound like everyone else. With this mindset, much of the music industry has become stale and unoriginal. So when you do find that special artist or band that decides to incorporate several different styles into their sound, they really stick out from the crowd. One such band that is creating a sound by incorporating many different styles into their music is Colobar.

Bulgarian musician Angel Angelov is a multi-instrumentalist who came up with the original concept for the band Colobar and recorded much of the original tracks that would eventually become an album. But since the time of the original recordings, Angelov has added other musicians to help fill out the rest of the band’s progressive metal sound. Along with Angelov, the rest of the band consists of Konstantin Jambazov on guitar and bass, Emil Kosturcov on drums, Kiril Kirilov on piano and keys, Radoslav Todorov on piano and Carl Sentance on vocals. This group of musicians helps create the sound of the band that is based around heavy metal but also incorporates rock, jazz, fusion and even Eastern European etno motives. What comes out is a style that literally shifts on a dime throughout each and every song. This wonderfully creative and refreshing music can be found on the band’s 2012 release entitled Behind the Veil of Oblivion.

As Colobar is a progressive heavy metal band, the first track on the release, “Change of Ages” is a straight-out heavy metal song that really kicks off the album in a big way, with a strong feel that truly captures the feeling of great heavy metal. The one thing that stands out more than anything else is the vocal quality of Carl Sentance, the vocalist for the band. On much of the song, Sentance lays down some great metal vocals, but he also shifts effortlessly to vocals that sound closer to rock vocals when the song changes feels. The shifting feel in the vocals matches the music well and shows off the talent in Sentance as a singer.

The warmth of the keyboards at the beginning of the title track of “Behind the Veil of Oblivion” leads into some very strong jazz playing on the song. This leads to a lite rock feel that may remind you of a song by Billy Joel. But before you get too comfortable with this sound, the band once again changes direction and goes off into a heavy metal feel. The contrast between the lightness of the rock and the heaviness of the heavy metal on the track shows off the talent of the band as well as the musical ability of Angel Angelov as a composer.

“Timeline” is one of the most unique and unusual tracks on the release. Within the first two minutes, the feel of the music changes three times: The track begins with a heavy metal feel and shortly changes directions as they enter a passage that sounds like something that Jethro Tull would have written; then, the band creates a musical feel that combines two opposing sounds together- that of heavy metal and the delicate sound of the piano. This heavy metal/piano sound leads into the final change when the band plays some melodic heavy metal.

Like “Timeline,” “Listen” also changes directions. However, with the song “Listen,” Colobar moves from style to style effortlessly, changing from metal to jazz to rock and back again throughout the length of the song. Nothing sounds out of place since the band incorporates anything and everything into the song and never dwells on any one style too long.

The first 80 seconds of the song “Secrets” is a fast-paced instrumental but soon turns into a progressive rock track. “Secrets” seems to be the one track on the release that was composed to appeal to the average music listen who might not appreciate the ever-changing style of the band’s music, as the band stays in one mindset throughout the majority of the track without changing styles multiple times. If you are a fan of more conventional music that doesn’t change styles, this is probably the track you’ll enjoy the most.

“The Way Out” is another track that finds Colobar exploring their progressive side. While the track features a metal base, other styles included in the song are rock, jazz and even some Eastern European etno flavor. While many might like a track like “Secrets” where the band focuses the talents on playing one particular style of music, it is on a track like “The Way Out” that you really get a sense of who these musicians really are.

Behind the Veil of Oblivion from Colobar comes to a close with the most melodic song of the album, “Can’t Feel”. Along with a slight rock/metal feel, the track features an orchestration that gives the song a beauty all its own, separating it from the rest of the release. This track also gives singer Carl Sentance the chance to stretch his vocal cords while showing off his range as a vocalist who can sing not only metal but also more sensitive material like “Can’t Feel”.

As a band that is able to play heavy metal, rock, jazz, even fusion and etno, Colobar is a great find in today’s music industry. And the band’s 2012 release, Behind the Veil of Oblivion, showcases the talent of the band, giving the listener an album that will satisfy many different tastes in music all within the span of 40 minutes.

One reply on “CD Review: Colobar “Behind the Veil of Oblivion””

It's all true about beeng different, specially when there are so many bands these days who sound prety much all the same. The chalange now is who will stand out from the croud as something unique. This album does exsactly that, unique and diferent, yet full of music that makes you feel good and you can remember. Really outstanding album 10 out of 10 star.