Chris Daughtry is now feeling the other side of the double-edge sword of having a phenomenally successful debut album. The former American Idol contestant was subject to one of the biggest injustices in the history of the show by being voted off far too early in the competition several years ago. Perhaps a blessing in disguise, he went on to make one of the biggest selling records in recent times, gracing radio with plenty of melodic hard rock goodness. He is his own hard act to follow.

To help with the sophomore effort, Daughtry has enlisted the songwriting talents of Nickelback’s Chad Kroeger, Brian Howes, Mitch Allen, and more. The disc begins with the in your face guitars and the soaring, badass vocals we all expect from Daughtry. After this fierce reminder that he is still a force to be reckoned with, he glides right into the more radio-friendly “No Surprise”, following this up with three more pop-based rockers, “Everytime You Turn Around” (a personal favorite), “Life After You”, and “What I Meant To Say”. After this, the songs are OK, rarely leaving the ballad or mid-tempo pace, and not matching the quality we’ve heard on the debut. The latter half of the CD is very ballad heavy and grows tiresome, not helped by duds like the country-flavored “Tennessee Line”.

Another complaint is that the record seems to be on a mission to impress with the guitars and bombastic production rather than the voice. Daughtry has an amazing voice, but it is a shame to hear it take so few chances and to persistently get buried in the excessively loud guitars. Lyrically, we’re also on ho-hum ground: unimaginative and straight-forward, but at least not silly.

The record is solid, but Daughtry is just running in place. In short, the title of the first single pretty much sums up the record as a whole: no surprise. I hope he comes back with a vengeance on the third release to give us the record we know he has the potential to deliver.

Click on the album cover and buy it from Amazon: 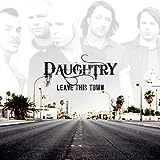