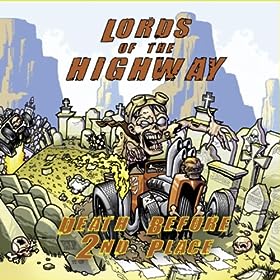 Lords of the Highway have been together for over twenty years, adding a lot of rock and roll power to the music scene of the city of Cleveland. The band is composed of singer/guitar Dennis Bell, Jim “Jimbo” Hissem on bass and Joe “Jocephus” Hissem on drums. In the two decades the band has been together, you easily could have seen the band perform in one of the many music venues around town, no matter where you are in the Greater Cleveland area.

Lords of the Highway is a rockabilly trio that keeps the traditions of that style of music alive, adding their influences to the music. The band takes a lot of their style from bands like the Stray Cats and adds some of the playing of people like “guitar god” Dick Dale to their sound, all while including more than a few elements of horror to their lyrics. When you combine all of these various parts of the band’s music together, you get a very unique, and very dark, style of rock and roll.

Over the years, Lords of the Highway has released three albums of their style of rockabilly. Their latest album is entitled Death before 2nd Place. The 2011 release is probably the best album the band has put out.

Death before 2nd Place from Lords of the Highway is an eleven-song release that starts strong and never lets up. The CD begins with “Get in my Fun,” a track that features a lot of energy from the band as the guitar of Bell is one of the elements that makes the track strong, not to mention Bell’s over-the-top vocals that add a lot of “fun” to the track.

While the vast majority of Death before 2nd Place was created by Lords of the Highway, the band takes a shot at “Devil’s ½ Moon,” a track originally recorded by The Heptanes. Lords of the Highway seem to have a lot of fun with this horror-themed song, which is a fast paced rockabilly jam, and the song lyrics about trying to outrace the devil as he gets closer add that horror element that makes Lords of the Highway fun and unique.

Another track that features horror elements in the lyrics is the song “Graveyard beyond the Woods”. The song about the dead meeting up for a meal is probably the track that shows off the band’s talent as musicians the most of any of the album’s tracks. Guitarist Dennis A. Bell adds a lot of twang while the thumping of “Jimbo’s” bass and the playing of Jocephus’ drums add the strong backing that creates perhaps the strongest and most entertaining track on the album.

On the track “Dynaflo,” the band lets loose with a great instrumental rock song that would make Dick Dale proud. The track feels like it would have been played on the radio back in the sixties. While other tracks on Death before 2nd Place feature spots where you can hear the talents of the players in the band, “Dynaflo” really allows the listener to enjoy the playing of each musician on this instrumental song.

Lyrically, the album’s most interesting song is probably “My Name is Evel,” a track that pays homage to the world famous stuntman. The rockabilly music seems to fit well with the image of Evel Knievel.

Lords of the Highway bring Death before 2nd Place to an end with the track “Run from the Graveyard”. Yet another horror-themed song, the track works the best with the rockabilly and horror lyrics in creating a very strong song with which to end the album. And the “hidden track” that follows the song really makes it feel like a theme song to a movie.

If you are a fan of retro sounds, there are many moments on Death before 2nd Place, the newest release from Lords of the Highway, which will make you happy. The eleven tracks feature great playing, good vocals and a whole lot of fun. If you have never heard Lords of the Highway before today, start with this release and then add the other releases to your music collection.

Click HERE to see the video to the Lords of the Highway song “Rat Rod”.

2 replies on “CD Review: Lords of the Highway “Death Before 2nd Place””