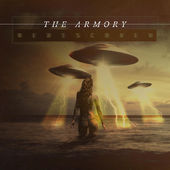 Many of today’s rock bands that are out there selling out music venues are filling up those venues and radio airwaves with a pop-inspired style of rock and roll. This pop-based rock is mainly to ensure music sales. Along the way, that pop-based sound replaced the real rock and roll that was being created only fifteen years ago; but every once in a while, you will find a band that still brings the energy that many seem to have lost. One such band that still has that strong rock edge to their music is The Armory.

The Georgia-based band of The Armory is a five-piece musical outfit that is made up of vocalist/guitarist Sean Wheeler, vocalist/bassist Marc Harris, guitarist John Patton, guitarist Ricky Free and drummer Ben Harris. Together, these five musicians are currently creating music that blends together both modern-day rock and roll and rock and roll that contains more of a “pop” feel to it. That interesting mix of the two styles will help keep the radio listeners happy while also giving the fans of more aggressive rock and roll music something to enjoy. That musical mix can be found on the band’s 2014 album entitled Rediscover.

Rediscover from The Armory begins with the track “Stay”. The lead-off track is one of the strongest and hardest rockin’ tracks and features a sound that makes use of all three guitars from Sean Wheeler, Marc Harris and Ricky Free. The combination of those guitars creates a strong, driving feel to the song while also giving the track enough of a “pop” feel that the track would feel right at home on Top 40 radio formats.

The Rediscover album continues with the track “If I Ever”. While “Stay” contains a “pop” approach, “If I Stay” finds the band creating a track with more of an edge. Along with that harder approach, the music also has a stronger, slower feel. The track also allows the vocals from Sean Wheeler and Marc Harris to come through a lot stronger as the vocalists add to energy of the track with their energetic vocal delivery. Together, the vocals and the music of the track create a very strong track.

The Armory changes directions on the track “Sanctuary”. While the first two tracks of the release find the band creating songs with modern-day rock sounds, “Sanctuary” contains a New Wave sound that brings to mind songs that were created by the Duran Duran from the 1980s with a little New Wave sound thrown in as well. The guitars on the song give the track a feel of the days when British and American bands were trying to give rock and roll a little life by creating rock music with a slightly different feel. The playing of the guitarists on this track provides that difference and the song sets itself apart from the majority of the release.

The slow pace at the beginning of the track “Fortune and Pride” brings to mind the feel of Alternative Rock but that style only lasts for a little while before the track transitions to a faster pace that could be found in rock music from the mid to late eighties as part of Power Rock radio formats. Needless to say, the song could easily find its way onto Top 40 radio.

The title track on Rediscover from The Armory is a song about finding what it is you seek. The track begins with a light and easy approach to the music with an almost ballad-like feel to the music. That feeling goes well with the sentiment of the song’s lyrics. Soon enough, however, the energy level of the music changes as the electric guitars kick in and the song takes on a more upbeat approach.

While some of the songs on Rediscover have enough commercial feel to them to be played on radio, the track “Young Hearts” is the one track that feels as if The Armory decided to create once song on the release that was absolutely written as a single. Just like the track “Sanctuary” from earlier on the album, the pop approach on the track has a sound that is very reminiscent of Duran Duran. The strong track helps add a lot of strength to the second half of the release.

Throughout their current release of Rediscover, The Armory changes musical directions from one style of rock and roll to another and that mix makes a great release with many strong moments throughout the album’s nine tracks. The ever-changing sound and style of the band’s music on the release keeps the album strong.

Check out the video to “If I Ever” by the The Armory by clicking on the link.