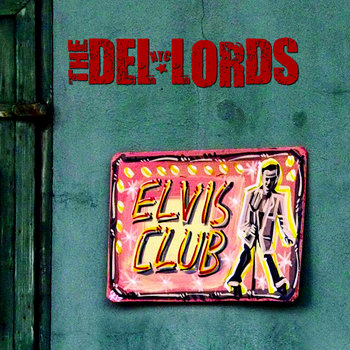 Back in the late eighties, four musicians came together to form a rock band for the purposes of bringing a little life back into the somewhat stagnant rock scene in America at the time. The band that was intent on adding that energy back into Rock And Roll was called The Del-Lords. Made up of lead guitarist/vocalist Scott Kempner, guitarist Eric Ambel, bassist Manny Caiati and drummer Frank Funaro, The Del-Lords had a short but lasting effect on Rock And Roll. The band released several albums of music that did just what the band wanted- they put a little life back into the music.

And then, the band called it quits. Almost as fast as they appeared on the scene, the band quickly ceased to be. The Del-Lords only existed as a band for eight years before the four members of the group went their separate ways to further influence music as part of other groups. The only thing that remained of the group when they split up was the four studio releases and one live album that they put out during their time together.

It was not that long ago that the band reformed. A Spain-based promoter offered The Del-Lords the chance to reunite for the reason of doing a small tour over in Spain. And as the reunited Del-Lords found their groove once again, they also rediscovered the desire to continue on as the band they once were. That led to three of the four founding members of guitarist Eric Ambel, drummer Frank Funaro and lead guitarist/vocalist Scott Kempner wanting to write new music. The band called upon several bassists (original bassist Manny Caiati left to return to his work after the tour of Spain) and went about recording the first album for the group in over two decades. When the recording was finished the band decided that Steve Almaas was the man to ultimately take the position of bassist in the band. It is Almaas that is joining the band on their 2013 tour in support of their new album.

The new release from The Del-Lords is called Elvis Club. The album seems to find the band in the same exact place, musically, where they were two decades ago as if there has been no time lost at all from the band’s last release until this new one. If you liked the band and their sound back in the 1980s, you will find that the rock and roll contained on this new album from the band to be very familiar in its feel.

The new release from The Del-Lords begins with the track “When the Drugs Kick In”. While that may not be the most commercial sounding song title, The Del-Lords never existed to be a band that followed the path of most commercial bands. They came together to create music to bring back some of the energy to the music of the late eighties and continued to do so throughout the existence of the band. With this track, The Del-Lords create a track with plenty of energy; and besides, it lives up to the old cliché of “Sex, Drugs and Rock and Roll”. What more could you ask for?

Elvis Club continues with the track “Princess”. While the first track has a lot of energy, this song is one of the tracks that really bring back the classic feel of the band’s earlier material. The lyrics on the track help to add a bit of humor to the album. The lyrics also have a simplicity about them that makes the song easy to sing along with.

While the album has several good tracks at the beginning the album, the first song on the release that feels as if it could be used as a single is the track “Flying”. While most of the release features a strong electrified feel to it, “Flying” takes on a slightly easier pace. The music to the song has a great hook to it and the lyrics are just as easy to sing along with as the lyrics on the earlier track “Princess”. “Flying” ends up being one of the strongest tracks on the entire album.

With the track “Everyday,” the band takes the feel of their music back a few decades. With its sound, the track could have been created at the same time as music created by the originators of rock and roll such as Buddy Holly, Elvis Presley and other classic rock stars. “Everyday” even has a lyrical feel that may remind you of something Buddy Holly could have written during his time.

With the song “You Can Make a Mistake One Time,” the band turns to blues-rock feel in their music. The resulting track feels as if it could have been created by Canned Heat during the time of the classic lineup that included Bob “The Bear” Hite and Alan “Blind Owl” Wilson. The lead guitar on the track adds that certain blues feel that helps to give the song a different feel than the rest of the release. The slower pace of the song also adds to that different feeling on the track.

For their first album in twenty years, The Del-Lords have created an album in Elvis Club that is very strong and will stand up just as well as the band’s previous albums. If you were a fan of this band back during their heyday, The Del-Lords have definitely come back in a big way and this album is worth every minute of playing time.

Click the link for the live video to the song “When the Drugs Kick In“.

Click the link for the classic song “Judas Kiss” from The Del-Lords.