My introduction to singer-songwriter Madeline Finn and her music came with a pre-arranged open-mic called Brent Kirby’s 10×3 where Finn performed three songs. At the end of those three songs, I found myself thinking that that time on stage for Madeline Finn simply wasn’t long enough as I wanted to hear more from the singer. And with a voice that reminds me of Norah Jones, Finn has a quality that begs you to listen.

When I finally was able to hear X Waters, the new release from Madeline Finn and the rest of her band called The Whiskey Hollow, I was not surprised as I had already experienced Finn’s sound and style. I was also not disappointed as the music contained within the seven-song release was everything I had enjoyed live plus even more as the release from The Whiskey Hollow took the acoustic sound from Madeline Finn and expanded upon it.

Along with Madeline Finn on vocals, guitars and writing, the rest of the band consists of Joe Botta on bass; Gabriel Swarts on electric guitar, percussion; Raymond Flanagan on electric guitar; Joe Czekaj on percussion and Shelby Lynn Sangdahl on cello. Together, The Whiskey Hollow creates a sound that combines indie rock, alternative, folk and even blues.

X Waters, the new release from The Whiskey Hollow, begins with the track “Tree Talker”. The acoustic rock track features Madeline Finn’s vocals and acoustic guitar as she and the rest of the band comes together to combine some rock and blues elements together to form a track that sounds very much like something that would be found on KT Tunstall’s Eye to the Telescope release. In fact, “Tree Talker” could remind the listener of Tunstall’s “Big Black Horse and a Cherry Tree”. The second half of the track finds Finn creating an acoustic folk feel to the music as the song seems to drift off into the distance. “Tree Talker” is a very strong opening track for the new release of X Waters.

The new album from The Whiskey Hollow continues with “Hudson Hill”. With this track, the band takes the blues influence on “Tree Talker” and increases it. The combination of blues, folk and rock in the music creates a very strong track with plenty of substance. The song feels like it could have been created during the sixties but also seems to have a modern feel to it, as well. Like “Tree Talker” before it, “Hudson Hill” is a track that grabs the attention of the listener and will never let go.

With the track of “Neat,” you get to know a little bit about the sense of humor from Madeline Finn. The track features a line that goes “Give me some whiskey and give it to me straight”. The title seems to be a play on words as both “straight” and “neat” mean the same when speaking in terms of drinking. The slow tempo of the music goes well with the lyrics about looking for some sort answer to life’s little problems. “Neat” is a track that has the most body to it as you can hear all of the instruments very clearly. Finn’s acoustic guitar, an electric guitar, Joe Botto’s bass and the keyboards all add up to a track where the listener can hear the pain and anguish in Finn’s lyrics.

One track that allows the singer-songwriter quality of Madeline Finn to come through is “Seasons”. While the song does contain the entire band, the track begins with a generous amount of just Finn and her acoustic guitar. The first two minutes of the track finds Madeline Finn’s acoustic guitar setting the slow pace with just a little help from Flanagan’s electric guitar adding a little atmosphere in the background before the rest of the band joins in. The mostly-acoustic rock track adds elements like cello from Shelby Lynn Sangdahl as well as harmonica to become one of the most orchestrated tracks on the release. In fact, the addition of the multi-voiced choir that appears on the track adds even more depth to the music. But for all of the elements that get added to the track, it is the voice of Madeline Finn and her guitar that stand out.

The release comes to an end with the track “Philco”. Different from any of the other tracks that preceded it, “Philco” finds Madeline Finn adding guitar and also keys to the track. The song about an old broken radio player finds Finn looking inward as she examines her feelings about the ways of the world. The final track of the seven-song release ends up being another track that needs to be heard. When the music for the album comes to an end, you start examining the packaging for X Waters from The Whiskey Hollow. It is at that point that you end up realizing that the pictures contained in the packaging help bring to life what you just listened to.

X Waters from The Whiskey Hollow is strong from the very first song and never lets up. And with the different genres and styles of music used to bring Madeline Finn’s words to life, the listener has plenty of things to keep them entertained.

To hear the music of The Whiskey Hollow, check out the video to the track “Hudson Hill“.

To purchase X Waters from The Whiskey Hollow, click on the album cover below: 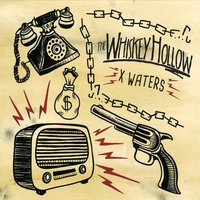