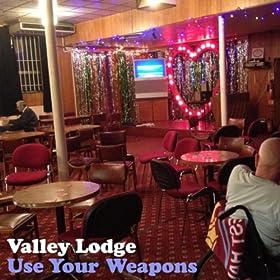 Dave Hill, a man who has made a name for himself as a comedian and writer, has returned to his rock and roll roots that he cultivated in Cleveland as part of several bands including Sons of Elvis and Uptown Sinclair, among others. Lately, Hill has been creating music with a New York-based rock outfit by the name of Valley Lodge. Along with Dave Hill on vocals and guitar, the rest of Valley Lodge consists of John Kimbrough on guitar, Phil Costello on bass and Rob Pfeiffer on drums.

Use Your Weapons begins with a track entitled “Go”. The band creates a track that is equal parts rock and pop music. The resulting track has a feel that is light and fun while still having a good amount of rock feel to it. The beat is strong while the lyrics are easy to sing along with. The track is rather commercial and could easily fit on any Top 40 format.

One of the strongest tracks on the newest release from Valley Lodge is the track “Sweet Elizabeth”. The song features a drumbeat that will totally remind you of the drumbeat from “Ballroom Blitz” from Sweet. The infectious drumbeat segues into a song that has a melody that sounds very much like something that would have come from Dave Hill’s earlier band of Uptown Sinclair. In fact, “Sweet Elizabeth” could easily have fit onto Uptown Sinclair’s self-titled release from 2001.

With the track “Kiss Me, I’m Drunk,” Dave Hill takes his stand-up experience and creates lyrics that have plenty of humor to them. The track has a George Harrison-like feel to the music. One of the things that make the song sound so Harrison-like is the opening guitar riff and the guitar parts throughout the song. The song could remind you of the later songs written by Harrison during his solo career and/or during the years he was with The Traveling Wilburys.

The track “Pretty Thing” seems to take the sound of Valley Lodge back a few decades as the music for the song is rather reminiscent of songs created during the Glam Rock era of rock music. “Pretty Thing” has a sound that seems to have been influenced by Gary Glitter or even Alice Cooper.

With the song “Make Up Your Mind,” Valley Lodge creates a track with a staright-out rock sound. The track feels as if it would have fit in nicely with rock and roll from back in the eighties. The track features a rather humorous line of “Is this ‘like’ or could it be love?”

“Waiting in the Rain” is one of the strongest tracks on Use Your Weapons from Valley Lodge, and one of the most unique, as well. The relatively short song (it is barely over two minutes) is a solid rock track even though it contains no drums. The song begins with the sound of rain before the guitars begin and help to build a very rockin’ track. The song features hand claps in the style of John Mellencamp’s “Jack and Diane”; although, “Waiting in the Rain” has a much stronger rock feel to it. With the strength of the guitars in the song, you hardly miss the drums. The song even includes a guitar solo that feels like something that would have come from Bon Jovi. The song is one of the best songs on the album.

The feel of the album changes with the track “Gimme Gimme”. The track has a slight disco feel to it with some strings thrown in. “Gimme Gimme” is another track that has a very commercial feel to it as the lyrics are very catchy and easy to sing along to.

The ten songs that make up Use Your Weapons from Valley Lodge are nicely varied, changing directions with every track. The album has something for every rock fan.

To discover some of the music of Dave Hill and the band Valley Lodge, check out the band’s Reverbnation profile.

Click HERE for the video to “GO” from Valley Lodge.

3 replies on “CD Review: Valley Lodge “Use Your Weapons””

In the next coming months, we will have releases from Sam Martin, Kethro, and Dojorok. You can find all of their music and information at the links provided below.

Valley Lodges latest album ‘Use Your Weapons’ is truly an extrusion of pure charm! So many good songs one could easily believe Valley Lodge is a high-functioning entertainment machine!