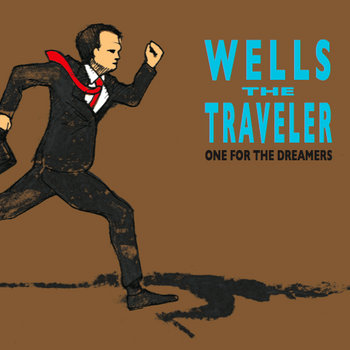 One for the Dreamers by Wells the Traveler begins with the track “Can You Feel the Rain”. With a sound that brings to mind something from either U2 or the Welsh band The Alarm, the song “Can You Feel the Rain” contains a certain amount of beauty in the rock music that makes up the track. The track features simplistic lyrics that can easily grab the listener and have them singing along with the track before the first verse is over.

As a way of adding a bit of separation between the first track and the rest of the release, the track “Turkish Café” is a percussion-only track. The danceable groove created by the drums on this track is another instance where the band all but invites the listener to get up and dance.

With the track “Manchester,” the lyrics of the song create a more personal connection than the remainder of the album. On this track, Wells the Traveler creates a song that seems to find Danny McGaw reflecting on his homeland. The folk-rock feel of the track brings to mind American bands from the 1960’s like The Lovin’ Spoonful and the folk feel to the music gives the song a beauty that the listener will enjoy.

The fourth track on One for the Dreamers by Wells the Traveler is the title track of the album. With the makeup of the band, “One for the Dreamers” is one track that truly contains both the English influence from Danny McGaw and the American influence from the rest of the band. The song features a Beatles-era British Invasion Rock feel and also contains a generous amount of American folk feel with just enough twang to it to classify the track as Alt-Country. That combination creates one of the most interesting and strongest tracks on the album.

One of the strongest tracks on the One for the Dreamers album from Wells the Traveler, as far as commercial value is concerned, is the song “Stand up Straight”. The track has a timeless rock feel to it and just like “Can You Feel the Rain” before it, “Stand up Straight” will grab the listener’s attention and not let go.  The track features lyrics about learning to move on. “Stand up Straight” contains enough familiarity to it that listeners will gravitate to the track.

While most of the One for the Dreamers album from Wells the Traveler features a lot of Rock feeling to go along with the Folk feeling that accompanies it, the track “Simply to Talk to You” finds the band taking their folk influence and bringing it to the forefront of the music. The band creates one of the most emotional tracks on the album with this song. The mandolin from producer Mike West helps to truly bring out the Folk feeling on the song.

Click HERE for a live performance of “Can You Feel the Rain” by Wells the Traveler.