Let me set the scene: it is the middle of the ’90’s, the noisy, tuneless musical aberration called grunge has faded with Kurt Cobain’s cowardly self-inflicted death and all of the hipsters and music journalists who haven’t lost their minds over the momentary lapse of reason called “the swing fad” have gravitated over to another musical uprising: the so-called “alt.country” boom.

Originally tagged by lazy music scribes as springing from the popularity of the band Uncle Tupelo due to benchmark bands such as Wilco and Son Volt springing up from that band’s ashes, the rise of the scene can be extended further into the past where bands such as The Replacements, The Brandos, The Knitters, X, and The Blasters among others were the REAL influence of the scene, not to mention the new-breed of Bakersfield artists represented by Dwight Yoakam and others. And, lest we have forgotten, the fine folks at reissue label American Beat have finally decided to resurrect three albums from one of the first bands to infuse modern post-punk rock with the rootsy, gritty, rough-hewn sound of old-fashioned country: The Del-Lords. Though the band’s music sounded very little like country music of the fiddle and mandolin variety, one can hear the retro sound that, if one wanted, can easily be tracked in a straight line to groundbreaking artists such as Johnny Cash.

Formed by ex-Dictators guitarist Scott Kempner, it’s no wonder the Del-Lords had a rough-hewn roots rock sound. The Dictators were one of the NYC’s best proto-punk bands of the late ’70’s though they were eventually overshadowed by the likes of The Ramones, Talking Heads and Blondie who emerged from the same scene. Kempner eventually tired of the non-response to their albums by music scribes and the public at large and decided to take a different tack. Rounding up like-minded musicians such as fellow guitarist Eric “Roscoe” Ambel (late of rocker Joan Jett’s band), bassist Manny Caiati, and drummer Frank Funaro, Kempner and his new band quickly rose to the occasion and found an original sound that would eventually influence a ton of bands more than a decade later.

The band’s first album, Frontier Days, was produced by roots rock titan Lou Whitney (The Skeletons, The Morells) who was quickly making his name as the go-to guy for roots rock production chores, much like Ambel himself is today. At the time Whitney had as much to prove as the Del-Lords did and the pairing was pretty spot-on though the production does lack some punch and the fire present in the Del-Lords’ incendiary live shows was missing, as is often the case when trying to capture great live bands in the studio. Still, the album was filled with gutsy, primitive rock and roll yet did not sacrifice any melodic sense. That alone is quite an accomplishment and the music critics and fans tired of the upbeat pop of bands such as Kajagoogoo, Hall & Oates, Rock Springfield and the like began to take notice of the band’s gritty sound and no-nonsense, pretense-free music. While the album did not do much sales wise, a decent-sized cult following began to col;lect around the band and the band realized it was on to something.

Their second disc, Johnny Comes Marching Home, has Pat Benatar guitarist/producer Neil Geraldo hemming the production instead of Whitney. While surprisingly a slightly better choice than Whitney – at least according to the results – Geraldo’s production is a tad glossy for the band and yet again their recordings do not match the intensity and raucous power of their live shows, instead beset with many of the typical ’80’s production cliches of digital reverb drenching every thing possible and everything being filtered to within an inch of its’ life. A much better production choice would have been someone like Nick Lowe, whose hands-off production style would have been more of a fit for the band’s style. Still, the album rocks much harder than their first and is a bit brighter production-wise, boding well for the band if not quite coming up with the full-goods production wise. For the band’s part, they sound much more solid and in tune with each other than on their debut, obviously the result of strengthened relationships between the members from countless gigs bashing out honest and true rock goodness. Once again, sales were not what was hoped, but the band was drawing increasing praise from critics and was slowly but surely drawing increasing numbers of fans.

The band’s third album saw Geraldo return to the production chair but finally the formula works. The album, Based On A True Story, is the realization of everything the band was expected to achieve and then some. Geraldo lightened up on the reins a little on the production end of it and the band seems comfortable and finally gels on disc the way they had been live for years. It didn’t hurt that Kempner had managed to write his best batch of songs ever. Not that Kempner ever wrote a bad one, but he’s firing on all cylinders on this disc and just about every song is a keeper. Geraldo’s wife Benatar helps out on background vocals and Mojo Nixon does a perfectly over-the-top performance as a preacher on the song River of Dreams that is funny and compelling at the same time and raises the ante of the song considerably. The guest stars were definitely not the focus of the album, however. This is totally a Del-Lords disc and it is, for my money, the best work they ever did.

Any fans of alt.country or plain ol’ gritty rock and roll should have these albums already, but should pick them up if they don’t. These are the blueprints for what was to follow with the roots and country-tinged rock in the ’90’s and beyond and it is criminal the band really didn’t get the attention they deserved. Though one may rightfully reason today from what the individual members have since accomplished on their own that the band was less than the sum of its’ talented parts I pose the band was more a victim of the original alt.rock boom of the ’80’s where they were unjustly ignored in favor of Athens bands and obtuse pop combos. Though there was a retro movement going on in the country scene with artists like Dwight Yoakam and Rodney Crowell, the band was much too brash and rocking for that crowd and I am having Neil Garaldo’s name associated with the production would not do them any favors with the powers-that-were in Nashvegas. Pity. These albums are great and rightfully deserve another listen as they have influenced many artists who have come along since. Great stuff.

Buy the Del-Lords at Amazon. Click on a CD cover and support The Rock and Roll Report! 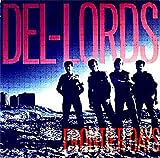 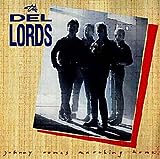 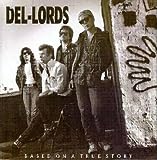 Maybe I am missing something but Frontier Days came out in 1983 or 1984, long before Cobain was a gleam in the eye of most music fans. Del Lords were one of my favorite bands during the mid 80’s, and Frontier Days was a solid album all the way

One of the great rock bands of our time.They did a session for the BBC on the Roger Scott Show.Has any one out there got a tape of this.