If I were to assemble a rock supergroup, I don’t think I would have ever dreamed up the combination that constitutes Tinted Windows. We have Taylor Hanson (Hanson (duh)) doing the lead vocals, James Iha (Smashing Pumpkins) on guitar, Adam Schlesinger (Fountains of Wayne, Ivy) on bass, and Bun E. Carlos (Cheap Trick) beating the skins.

It is easy to take shots at this band, and many critics have ripped them apart already. I won’t argue that the songs are musically simple with lyrics that are just one rung up the evolutionary ladder of your typical Hanson tune (ok, maybe down a rung in some cases – “Cha Cha”). Surprisingly, most of the songs were written by Schlesinger, but are devoid of his usual humor and clever wordplay. I guess you could say he tailored the songs for Taylor. But the point of this record is not lyrical sophistication – it is supposed to be light, fun, and catchy…and on those three criteria, Tinted Windows is wildly successful.

The record is buoyant 70s bubblegum pop with a modern rock kick, not unlike what The Raspberries might be doing today. And Taylor’s voice fits the rock groove very well. “Kind of a Girl” is the perfect summer sonnet sure to energize your mood: a by-the-book melodic rocker. Other highlights include “Messing With My Head” and “Nothing To Me”.

Call it low brow, musical junk food, a guilty pleasure – regardless, the feel good pop rock of Tinted Windows will be blasting out of my car speakers all summer. 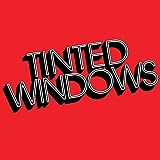